“Clothes change our view of the world and the world’s view of us.”
—Virginia Woolf

Orlando follows the adventures of titular nobleman as he spans cities, centuries, and eventually gender presentation.  After being taken under the wing of Queen Elizabeth the First and having his heart broken by a mysterious Russian princess, Orlando flees England in order to drown his sorrows. Instead, he takes a curiously long sleep and wakes to an even more curious discovery—she has become a woman. Taking her new identity in stride, Orlando must learn to navigate the world as she never did before, balancing her nature with the expectations of society. 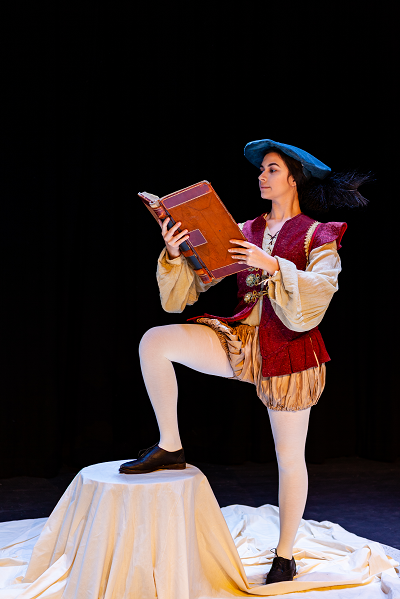 Director Matthew B. Zrebski will work with actors to find the heart of the work, what he calls, “the desperate search to discover acceptance from others and from self.” He believes the beauty of the story comes from the absurd, near-slapstick comedy divided by moments of stark reflection on love, loss, and despair. Zrebski is a multi-award winning director, playwright, composer, script consultant, teaching artist, producer, and a founding member of Playwrights West. He also directed Ellen Margolis’ Hide at Pacific University in Fall 2017.

“What has always struck me about this vigorous story—both in Woolf’s original and now Sarah Ruhl’s inventive, theatrical rendering—is that it dares to bring a hammer down on binary, cisgender culture, perhaps cracking open our perceptions of ourselves,” says Zrebski. “We are not as divided as we want to believe. Within each of us lies both woman and man, a potential union that yields the greatest empathy, for it opens our senses to all in the world.”

The Department of Theatre & Dance will lend extra consideration to the senses of the audience, as Orlando will be the first production on campus to partner with the Performing Arts Interpreting Alliance. The closing matinee performance, Sunday, October 20, will feature performance sign interpreters alongside the show to usher in what the department hopes will become a new normal for theatre on campus.

Admission is free to students and $5 for general admission.