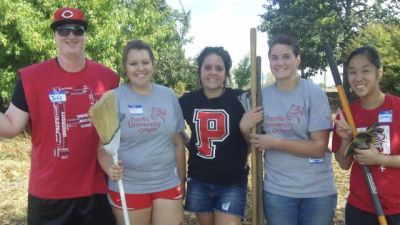 Brilliant sunshine and ample fellowship illuminated Pacific University on Saturday, Sept. 15, as more than 160 people turned out for the university's first Day of Service.

The four-hour event included some 135 students, both undergraduates and graduates, along with another 25 University faculty, staff and administrators and at least three alums.

The Day of Service, organized by the university's Center for Civic Engagement, replaced the former Sprucing up the Grove, which was aimed at engaging new students in civic engagement when they first arrived at Pacific.

The new service day is open to all Pacific community members on a voluntary basis, center director Stephanie Stokamer said.  Sprucing Up the Grove had been a required part of new student orientation and, as such, was limited to new students.

"The Day of Service emphasis on volunteerism, and the ability to do so with family and friends, ensured that people who took part really wanted to," Stokamer said.

Faculty from all three schools in the College of Arts & Sciences as well as the brand new audiology program and several of the health profession programs took part. Staff, including university administrators, also joined the effort.

Prior to the 12 service teams dispersing to begin their service, Hallick expressed appreciation for their time and energy.

"At Pacific, giving back is just part of being a Boxer," she said. "It's a part of Boxer Spirit, and you here today are taking the extra step to help those in need."

Pacific faculty took advantage of the opportunity to show what Pacific's experiential education is really all about.

“I think this is a way for me to care about the community,” said Dijana Ihas, assistant professor of music, who helped pick up trash and weeds at Harvey Clarke Elementary School in Forest Grove.

Working with her was another assistant professor, Ian Besse from the mathematics and computer science department. He and his wife, Jana J. Peterson-Besse, assistant professor of social sciences, combined childcare with their service: one picked up the trash at Harvey Clark, with the other walking their 7-month-old daughter Aster around in a backpack carrier; then they switched roles.

Two other youngsters, the sons of faculty member Enie Vaisburd, associated professor of media arts, literally jumped up and down with excitement about helping out, although perhaps for different reasons than adults. Jonathan Williams, 5, and his brother, Daniel, 9, looked forward to getting dirty, said their father, Cam Williams, (rather dryly). Their project, “The Big Dig,” involved clearing invasive species at the B Street Farm south of Forest Grove.

Helping out others played a big role in students’ participation also.

“I just care about the community and each individual in it,” said Spencer Wilson, a sophomore education major from Wasilla, Alaska.

Wilson served as a co-leader of a project involving painting a mobile home, sponsored by the organization Rebuilding Together Washington County, Inc. The program relies on volunteers in assisting low-income family with free repair and rehabilitation in their homes.

“The world is desperate for good people,” he said, adding that if opportunities happen, “One’s job is to do it and help out.”

“I just really like doing charity work,” said Griffin DeWitt, a freshman in music education, who spent his time sorting paint cans at the Habitat for Humanity store in Forest Grove. “I saw the ad in Boxer Briefs and I decided, ‘Why not?’”

Stokamer said the Day of Service is also about building a community. Judging from the turnout, which included 47 "day of" participants and three alumni who heard via word of mouth, the day also met that objective.