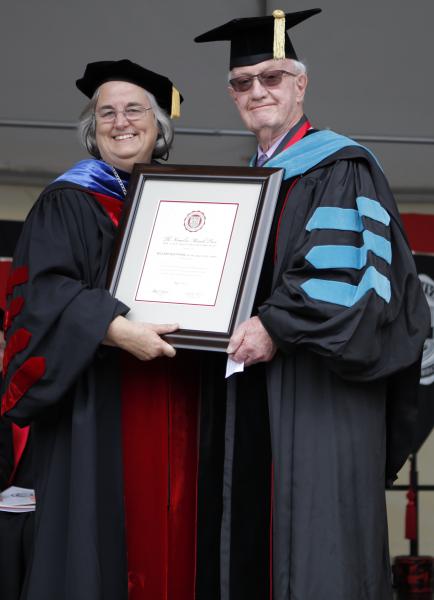 Pacific University alumnus and former Optometry dean and university provost Willard Bleything ’51, OD ’52 has been named the fifth recipient of the Kamelia Massih Prize for a Distinguished Optometrist. He received the award May 16 at Pacific University's professional programs commencement ceremony.

The honor is named after the late Kamelia Massih, a 1985 Pacific University College of Optometry alumna who passed away in March 2010 following a three-year battle with cancer. Massih served her patients and members of her community with a level of compassion and care that exemplifies Pacific University College of Optometry alumni.

Bleything retired in 2003 as Optometry Distinguished University Professor Emeritus, in Residence, after a long career stretching back to the 1950s as a faculty member and later dean. He served in the US Air Force, eventually becoming optometric consultant to the Surgeon General, until his retirement from the military in 1986. Bleything also had a private practice in central Oregon for 16 years, specializing in pediatric optometry. In 2002, the World Council of Optometry named him International Optometrist of the Year.

Bleything’s research interests center around healthcare delivery issues, including international optometry as well as pediatric optometry. He has authored more than 45 scholarly articles and other publications and lectured widely throughout the world. Along with serving as the president of his state optometric association, Bleything has been a state board president and president of the schools and colleges of optometry. He formerly held the position of secretary-general for the Asia-Pacific Council of Optometry and is a member of World Council of Optometry’s Education Committee.

“I'm really pleased to be here," Bleything told the graduates and other commencement attendees. "I've been here in many roles, but this is my favorite so far. Kamelia is a student I knew, and she really made a positive difference in the lives of so many. Kamelia had a keen affinity for this university and she and I shared this common relationship. I was her dean, and she won me over with her smile and demeanor. She would light up the entire room. I give my personal thanks to all who made this experience possible for me today."