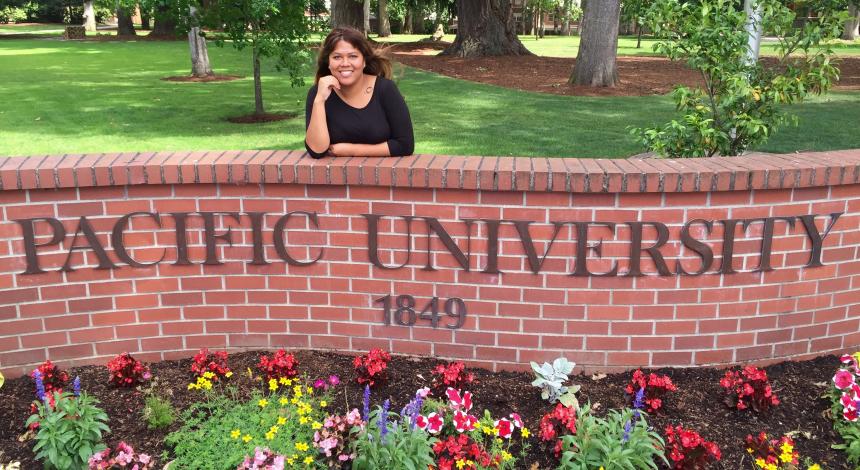 Purdy ’11 is fired with an uncommon passion for her part-time job.

Purdy is a graduate research assistant at the John A. Burns School of Medicine at the University of Hawai‘i, where she works for the Department of Native Hawaiian Health.

In exchange for her work, she receives a stipend and has her tuition covered. She recently completed a master’s in public health and soon will begin her doctorate in public health.

It’s hard to tell based on her enthusiasm for her work, but Purdy didn’t take a straight path to graduate school.

In high school, she wanted to be an optometrist. Like many interested in the profession, she learned about optometry when family members suffered vision problems.

Her visit to Pacific University — home to a prestigious College of Optometry, as well as undergraduate programs — sealed the deal.

“I just knew. ‘This is it,’” she said. “It was so beautiful and homey, and everyone looked so happy.”

She was particularly struck by the support offered to students from Hawai‘i.

“It is impossible to get homesick!” she said.

Purdy loved her Pacific experience: “I am such a huge advocate for that school,” she said.

She lived on campus all four years and was active in campus activities, including Lu‘au. She realized, though, optometry wasn’t her future. Instead, she turned her attention to another of Pacific’s graduate programs: physician assistant studies.

The PA program requires significant work experience in a medical setting as part of its application process, so after completing her bachelor’s degree, Purdy returned to Maui to work at a hospital.

It was there that she discovered public health.

“It was this perfect marriage of science, math and culture,” she said. “Hawaiian culture has always been a huge part of who I am.”

“I was never frustrated,” she said. “I just tried to find something that would fulfill me.”

Her master’s work focused on food and children — working with children to grow and prepare food. She was overjoyed when a little boy claimed the poi made from taro that he grew was the best he had ever tasted.

Midway through her master’s program, she found her current position with the Department of Hawaiian Health. She works with the Native Hawaiian Center for Excellence, where the focus is on recruiting Native Hawaiian students to the medical professions and promoting physical and mental health for the population.

The need for Hawaiian practitioners is considered a critical measure in the effort to improve Native Hawaiian health. As Purdy says, “We’re lucky to get a Native Hawaiian to see a physician."

Native Hawaiians frequently have logistical hurdles in the way of their healthcare, including transportation. And the struggle doesn’t end once they see a practitioner.

“It is hard to take advice from someone who knows nothing about your life,” Purdy said. “Native Hawaiian doctors are important because they get it. They’ll stay. They’re committed.”

Purdy still have several years of school in her future, but her big dream is to return to Maui, where she would like to build a comprehensive healthcare center for Native Hawaiians.

She dreams of a place where Native Hawaiians will have “access to traditional medicine as well as Western medicine.

“A place where people can go to heal. A place that provides services, including transportation. A place that offers the cultural and spiritual aspect of healing.”

Her vision is, in many ways, a return to a traditional way of life. She envisions a focus on gardening, preparing food, and fishing — activities that used to be part of daily life for Native Hawaiians.

For now, Purdy is excited to continue her education and focus on her work with her colleagues at the Native Hawaiian Center for Excellence.

And, though her path didn’t lead to optometry as she once expected, her core interests haven’t changed: “I always wanted to help people and be of service in some way,” she said. Along the way, she said she has encountered one solid truth, “The learning never ends.”