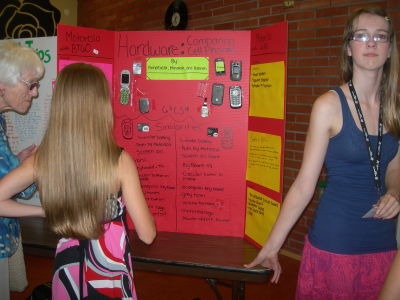 The third year of the free camp for girls in grades seventh and eighth, funded by a National Science Foundation grant of $554,000, ended after four weeks of classwork, projects and field trips with an evening get-together at the University Center.

With their families in attendance, the girls displayed posters of their accomplishments, showed off robots they had made, performed skits and showered compliments on their mentors.

This is the final year of the NSF grant, but camp directors Juliet Brosing, professor of physics, and Shereen Khoja, associate professor of mathematics and computer science, hope to continue the camp with other grants, including the possibility of obtaining corporate sponsors.

The directors are planning to apply for another program grant through NSF, and they hope at some point also to get the summer program endowed.

All expenses of the camp, including equipment, meals, transportation and lodging for an overnight field trip, plus salaries for staff, was provided at no cost to participants for the past three years.

Twenty-seven of this year’s participants were from Washington and Multnomah county schools with two girls attending from out of state. Some 60 to 80 girls have applied each year for the camp, according to Brosing.

“They’re all qualified,” she said, noting that the camp seeks to admit girls who have not had a lot of exposure to computer or other enrichment programs. In addition, she noted, the age range of seventh and eighth girls is a real advantage.

“That’s a real target audience,” she said. “That’s one of the bottlenecks to get girls interested in science. Basically, we want to give them the ammunition to remain interested in it so that when they get to high school, they decide to take the highest level of math and science so that when they go to college, they can immediately pursue the sciences if they want."

The camp is aimed at girls, and many of those who attend often tell Brosing, with surprise,  "I didn’t know there were other girls like me." Brosing said that for a variety of reasons, including peer pressure, middle school-aged girls too often do not get involved in technology-related courses.

According to Khoja, there is a significant shortage of computer engineers, but only 18 percent of computer science degrees are obtained by females.

“There’s a huge need for these kinds of camps,” she said. “In the field of computer science and technology, there’s far more jobs available than employees. There are not enough graduates to hire.”

The girls at the camp got a taste of what professionals in the computer science do with several field trips, including ones to Microsoft, Facebook and the University of Washington Computer Science Department in the Seattle area. The trip to Seattle involved a stay in the UW’s dorms, giving the girls a one-day exposure to what college life might be like.

Perhaps most popular was a tour of the animated film production company Laika in Hillsboro, which has produced hit animated films like Coraline.

As Brosing and Khoja noted to the parents at the July 12 reception, the visits to the technology firms were not just “show and tell” productions, but involved actual hands-on learning experiences provided by the technology experts.

In their time at Pacific, the girls also participated in a variety of technology activities such as learning about computer hardware, programing, web design and other topics with instructors Stevie Viaene, Gayathridevi Lyer, Jill Hubbard and Janice Levenhagen-Seeley.

“I’ve been really impressed by how fast the girls learned,” Brosing told the families at the reception.

In addition to the technology instructors, local area middle school teachers provided their expertise in working with the age group, said Brosing, adding, “That was a huge help.”

Each of this year’s campers received a certificate of completion at the July 12 ceremony, plus a $1,000 scholarship offer to Pacific University if they attend after graduating from high school.

A 10-year follow-up study of the girls who have attended the camp is ongoing. The goals of the study include: developing a strategy for middle school girls that instills a view of women scientists as leaders; improving female students’ confidence and skills in an effort to recruit them into science careers, especially in computer science; establishing a collaborative learning community including students, teachers, parents, faculty and community partnership; and distributing the results of campus project to create a national model.

Following is a list of the attendees and the locations of their respective schools: