Center for Peace and Spirituality

The 2015-2016 academic year was one of continued growth for the Pacific University Center for Peace and Spirituality (CPAS).

CPAS’s core mission remained the same, however: “providing students with the opportunity to engage in meaningful study, reflection and action based on the recognition that inter- and intra-personal peace are inherently connected and that concerns for personal spirituality are intimately related to concerns for one's social, historical, cultural and natural environment.”  This mission is in support of Pacific University’s overall mission to “inspire students to think, care, create, and pursue justice in our world.”

Working in collaboration with the Center for Civic Engagement, the Center for Gender Equity, the Tom McCall Center for Policy Innovation, and a variety of faculty, staff, students, alum and community partners, we sought to live out our mission this year by growing the Center with the continued goal of fully bringing to life the vision of CPAS becoming a regional center for peace and religious studies that University President Dr. Lesley Hallick and Dr. David Boersema had when founding the center.

The Pacific University Center for Peace and Spirituality houses both the comparative religion and peace & social justice minors. Work continued this year to reevaluate our academic programs with a goal of merging both minors.

Faculty and appropriate administrative staff will begin a process of reviewing this proposal in Fall 2017.

In the meantime, new classes have already been offered as the evaluation of the two minors has been underway.  For the first time in nearly two decades, a class on the Bible is now offered at Pacific (a core course for any liberal arts university): The Hebrew Scriptures and Christian New Testament in Historical Context. We also now offer a course on Religion and Social Health Policy that examines how religion influences the development of public health policy in the United States. 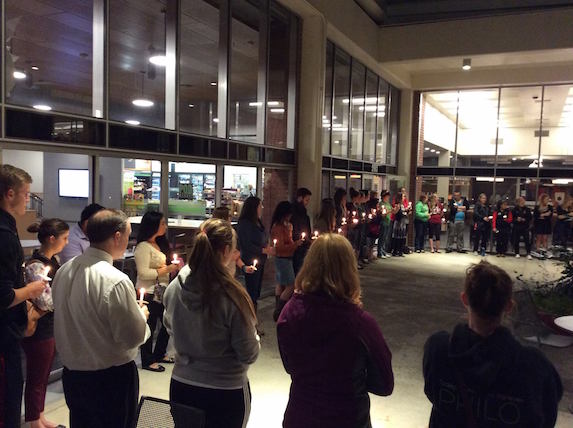 The Pacific community was shaken to learn of a mass shooting at Umpqua Community College (UCC) on October 1, 2015, in Roseburg, Oregon.

We have over 40 transfer students from Umpqua Community College at Pacific. Some of these students had direct connections with those injured and killed.

The Pacific Christian Fellowship called for a prayer vigil the night of the shooting. Rev. Dr. Chuck Currie, CPAS director and University Chaplain, attended and offered pastoral care to those impacted by the tragedy. Dr. Currie also made contact via email or phone with all 40 UCC transfer students.

A week later a candlelight vigil was held at Pacific to remember students lost and injured in the shooting. Campus Wellness, Student Counseling Center, and the Office of University Chaplain put together the gathering on the Forest Grove Campus to honor the Roseburg community. Messages of support from students were collected and sent to UCC. There was also a time for students to process the shooting with staff.   ‬

Churches across the United States used a prayer reflecting on the shooting written by Dr. Currie and distributed by the United Church of Christ.

United Church of the Philippines

Leaders of the United Church of Christ of the Philippines are at @PacificU talking with students about their work. pic.twitter.com/UAHPkvXi7U 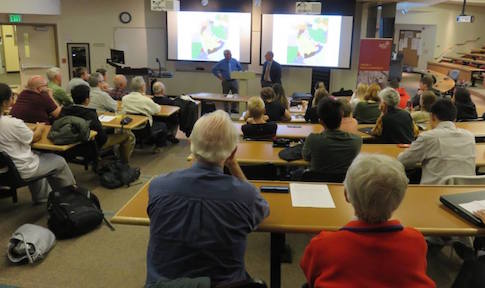 CPAS invited students and the public to a reception and forum with leaders of The Abraham Fund Initiatives of Israel. The event took place on Thursday, October 29 on the university's Forest Grove Campus.

The Abraham Fund Initiatives work to "promote coexistence and equality among Israel’s Jewish and Arab-Palestinian citizens. Named after the common ancestor of both Jews and Arabs, The Abraham Fund works toward a prosperous, secure and just society by promoting policies based on innovative social models, conducting large-scale initiatives, advocacy and public education.”

Co-executive directors Amnon Be’eri-Sulitzeanu and Dr. Thabet Abu Rass, who traveled from Jerusalem for the event, joined Dr. Chuck Currie and Dr. Raymond Haija, a member of The Abraham Fund’s U.S. board of directors, in a discussion with students and the public concerning the current situation in Israel / Palestine.

The following day, Amnon Be’eri-Sulitzeanu and Dr. Thabet Abu Rass met with a group of 40 students to discuss non-violent initiatives for social change.

Dr. Curried then traveled to Israel / Palestine with the Center for Jewish, Islamic and Christian Studies at Chicago Theological Seminary during the Winter term to meet with peace activists, political leaders, and both Jews and Muslims living in Israel / Palestine.  A new course on the Israeli-Palestinian conflict is being developed out of the travel seminar.

CPAS co-sponsored The Collins Lecture in Portland with Ecumenical Ministries of Oregon for the first time this year.

Discounted tickets were made available for Pacific students.

The 2015 Collins Lecture "The Gospel of Conquest," explored the history of the Doctrine of Discovery—“the 15th Century basis for European Christian claims to the Americas—and examined its continued influence on relations among church, tribe, and state.” Native American scholars and spiritual guides participated in small group discussions and an evening lecture. 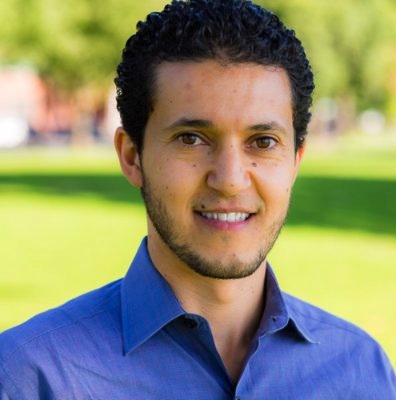 For the second year, CPAS sponsored The Rev. Dr. Martin Luther King, Jr.. Day Interfaith Worship Service as part of the University’s overall observance of the King Holiday.  The Rev. Jennifer Yocum, from Forest Grove United Church of Christ, preached the message. Mohamed Alyajouri, a member of the Muslim Educational Trust, offered a meditation on the link between the Civil Rights Movement and the movement today to combat Islamophobia in the United States.

CPAS, in partnership with the United Church of Christ Office of Communication, invited Pacific community members to fast from media violence from September 15-21, 2015 to honor the International Peace Day, September 21, 2015.

Participation was encouraged via social media.

Pope Francis in the U.S. and the crisis in Syria

Dr. Curried traveled to The White House for the arrival of Pope Francis at the invitation of President Obama. During his visit, Dr. Currie met with religious leaders and relief agencies from across the United States at the State Department about the refugee crisis in Syria and Europe.

Pacific community members were invited to advocate for refugees by supporting the work of the United Nations and faith-based organizations like Church World Service and the Religion Action Center of Reform Judaism. 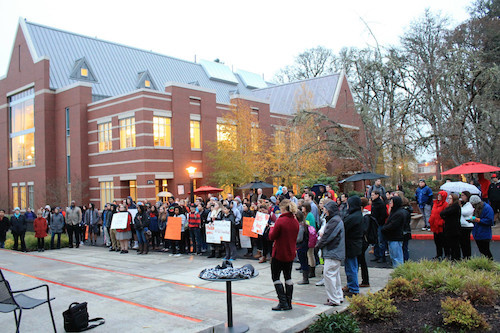 Dr. Currie worked with sociology professor Dr. Daniel Eisen and other partners to coordinate a racial justice solidarity rally that was held Monday, November 23rd after the assault of a black student at Lewis and Clark College, investigated as a bias crime, and after racist messages were posted on social media.  Many students from Pacific spoke at the rally.  Students from Lewis and Clark joined the rally held in Forest Grove and members of the Black Student Union at Pacific connected with their counterparts at Lewis and Clark for further discussion.  Pacific University President Dr. Lesley Hallick also spoke at the rally.

For the second year, CPAS was a co-sponsor of a January weekend retreat for students interested in learning social justice leadership skills. The retreat was designed to (a) examine structures of privilege (race, class, gender, sexuality, etc.) and their effect on our campus, (b) provide individuals with the skills to be effective allies and social justice leaders, and (c) provide students with the opportunity to discuss and identify ways to foster social justice on campus. Organized by a broad range of faculty and staff (Social Science Professors, Center for Civic Engagement, Center for Peace and Spirituality, Student Activities, and Alumni Relations) the retreat ultimately worked to create a community of diverse members from the Pacific University community that will be engaged in discussions throughout the year about social justice at Pacific. 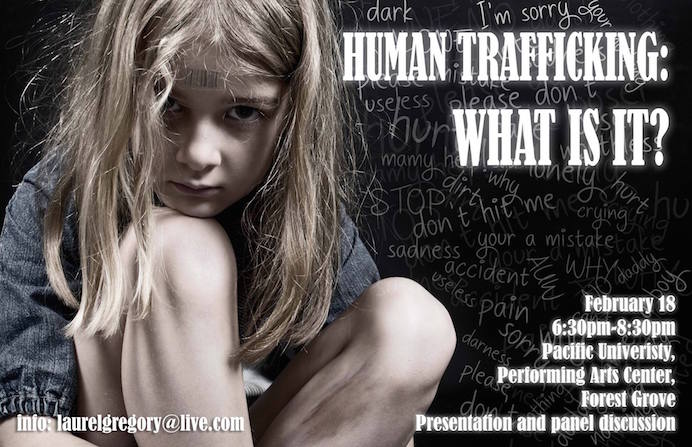 With the Center for Gender Equity, CPAS sponsored a February forum on human trafficking.

Human sex trafficking is quickly becoming a national crisis, and there is often confusion regarding what the words mean and who is affected.

An expert panel discussed the present situation, prevention strategies, rescue and restoration of victims, and prosecution of perpetrators. The audience heard personal stories from a survivor, a prevention specialist, the University Chaplain, local law enforcement, and an FBI agent.

Before and after the program there was a “How Can I Help Fair,” to give participants the opportunity to get involved— by connecting with organizations devoted to victim services and the elimination of sex trafficking.

As a follow-up, CPAS invited members of the Pacific community to visit Generation Freedom, where you can add your name with those calling on all the presidential candidates running to make a commitment to do more to combat human trafficking. Generation Freedom a non-partisan campaign supported by civil rights organizations and faith bodies. 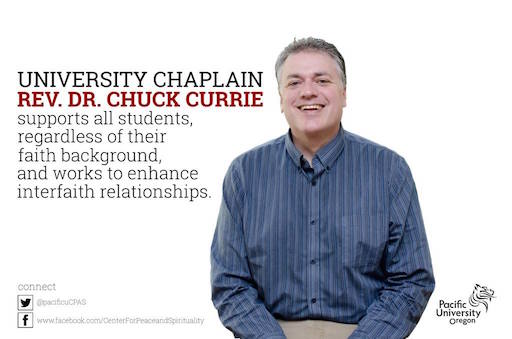 Dr. Currie serves as both director of CPAS and University Chaplain. This was just the second year that a chaplain has been on campus in thirty years. The university worked to promote the availability of the chaplain’s services through social media. Dr. Currie continued meetings across the university to introduce his role. In May, for example, Dr. Currie meet with all the members of the Pacific athletic department to discuss how he could be helpful to student athletes. Outreach has proved successful. More students are making appointments to visit with Dr. Currie to discuss spiritual issues and on many occasions, both faculty and staff have reached out to Dr. Currie for pastoral care. The role of University Chaplain was also integrated this year into the university’s Title IX Sexual Violence Prevention & Response policy.  Dr. Currie also returned to The White House this Spring for The White House Easter Breakfast with President Obama and Vice-President Biden. 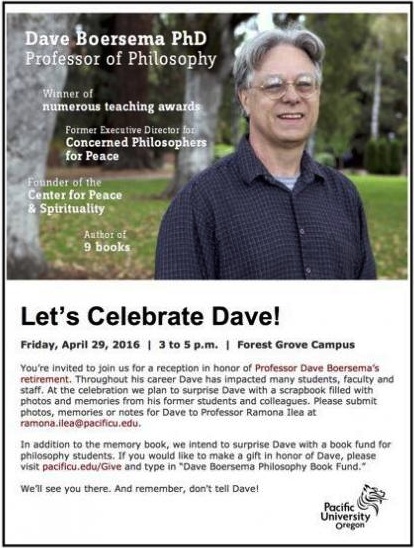 Dr. David Boersema was the founding director of CPAS, and recruited Dr. Currie to become the new director in 2013, so that he could return to teaching philosophy full time. Dr. Boersema then announced his retirement at the end of the 2015-2016 academic year. He will be deeply missed on campus. But his vision for CPAS will continue.

Support the Center for Peace and Spirituality

You can make a gift to CPAS by talking with the university’s development office. Online giving is available— type "Center for Peace and Spirituality" into the "other" category on the drop-down menu.