Center for Peace and Spirituality 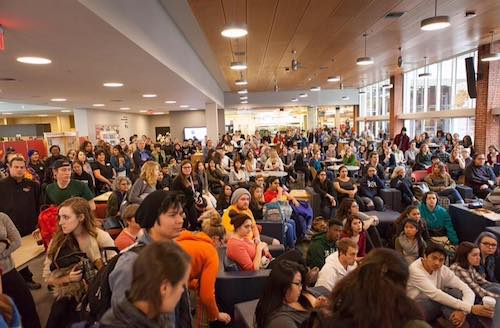 The Pacific Center for Peace and Spirituality (CPAS) worked with vigor during the 2016-2017 academic year alongside students, faculty, staff and community members to help implement Pacific University’s overall mission of creating a more “just world.”

That worked included progress with academic programs related to religion, peace and social justice and a variety of programs – many where the community was invited – to explore issues of concern linked with these areas of academic interest.

Again this year, CPAS partnered with the Center for Civic Engagement (CCE) to provide staff support for CPAS activities.  CPAS used work study funds to supplement the CCE budget to allow additional student workers to be hired. This allowed for CCE staff to work not just on civic engagement projects but also on issues related to peace and spirituality.

This year the School of Social Sciences adopted a proposal, modeled in part after one at Georgetown University, that would merge these minors into a new Religion, Peace, and Social Justice Minor.  For now, that proposal is on hold as academic programs, and funding issues are evaluated university-wide.

In the meantime, CPAS continues to offer new classes. In the last two years, The Hebrew Scriptures and Christian New Testament in Historical Context and Religion and Social Health Policy were added to the course catalog. This year, our course on The Middle East was updated to help students achieve a better understanding of Islam, along with the Israeli – Palestinian conflict and the Iran Deal.  Students should expect to see more classes dealing with Religion and Politics, Just Peacemaking, and a class solely devoted to the Israeli – Palestinian conflict in the coming two years.

The Rev. Dr. Chuck Currie, director of CPAS, has also been available to speak with classes about religion and society.  This year, Dr. Currie spoke with students in Introduction to Civic Engagement, Introduction to Philosophy and Introduction to Journalism. 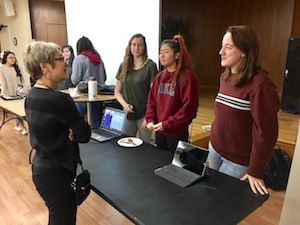 Dean Lisa Carstens talks with First Year Seminar students about visits they made to Temple Beth Israel, Ainsworth United Church of Christ, Bright Way Zen Center and Portland Rizwan Mosque as part of their studies regarding religious pluralism in the United States.

The Pacific University community marked International Day of Peace, Wednesday, Sept. 21, with the dedication of a Peace Pole on the Forest Grove Campus in front of Pacific Hall.

The International Day of Peace (“Peace Day”) is observed around the world each year on Sept. 21. Established in 1981 by unanimous United Nations resolution 36/37, the General Assembly has declared this as a day devoted to "commemorating and strengthening the ideals of peace both within and among all nations and peoples."

Pacific University student Jared Kawatani ’17 first proposed the idea of creating a Peace Pole on campus as a place for students, faculty, and staff to gather and reflect on peace. "Finding peace within the world, our community and ourselves is something that we are faced with in our Pacific community and all around the world," Kawatani said. "Currently, the world is pressed with issues such as the Syrian refugees, climate change, gun violence, and so much more.”

According to the Peace Pole Project, tens of thousands of Peace Poles exist in 180 countries as monuments to peace that serve as constant reminders "for us to visualize and pray for world peace.”

Pacific University’s new Peace Pole was made possible by grants from the University’s Center for Civic Engagement, Center for Peace and Spirituality and Undergraduate Student Senate. It has quickly become a place for students to gather and reflect during difficult times. 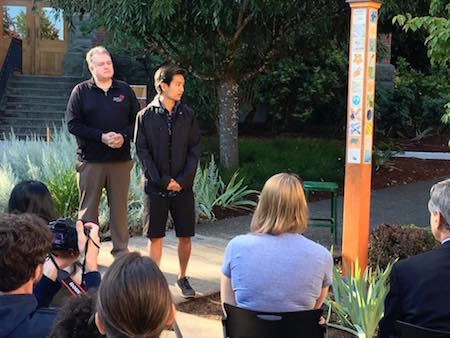 The third annual Social Justice Retreat for Pacific University students was held on the Oregon Coast from Thursday, January 26 to Saturday, January 28, 2017.

The retreat is designed to (a) examine structures of privilege (race, class, gender, sexuality, etc.) and their effect on our campus, (b) provide individuals with the skills to be effective allies and social justice leaders, and (c) provide students with the opportunity to discuss and identify ways to foster social justice on campus.

Organized by a broad range of faculty and staff (Social Science Professors, Center for Civic Engagement, Center for Peace and Spirituality, Graduate and Undergraduate Student Activities, and Alumni Relations) this retreat ultimately strives to create an affiliation of diverse members the Pacific University community (including undergraduate and graduate students) that will be engaged in discussions throughout the year about social justice at Pacific.

Over 20 students participated in the 2017 retreat.  Students were chosen to be part of the retreat after completing an application that asked them to explain why they wanted to participate.

Pacific University students from both undergraduate and graduate programs gather at the Oregon Coast for the Social Justice Retreat.

The Pacific University Center for Peace and Spirituality welcomed “Hand’s Up,” the must see play offered by Red Door Project, to the Forest Grove campus of Pacific University as an opportunity for students to reflect on issues of race and policing.

“Hand’s Up” is a powerful set of monologues commissioned by The New Black Fest in the wake of police shootings of Mike Brown in Ferguson, Mo., and John Crawford III in Beavercreek, Ohio, and others. Seven black playwrights were commissioned to write monologues that explore their feelings about the well being of black people in a culture of institutional profiling.

Over 600 people, mostly students along with community members, attended one of the three performances held October 22-23, 2016.  The Center for Civic Engagement provided critical staff support. 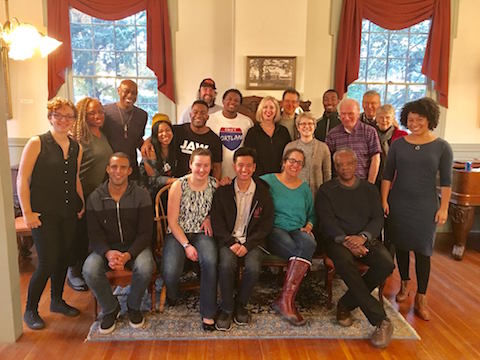 Members of the CPAS Advisory Committee and Pacific University students gather with the cast and crew of Hand's Up.

Students gathered at the University Center the day following the November presidential election at Pacific University to discuss the election results. Students, faculty, and staff expressed both fears and hopes for the future. It was a very difficult and emotional conversation. 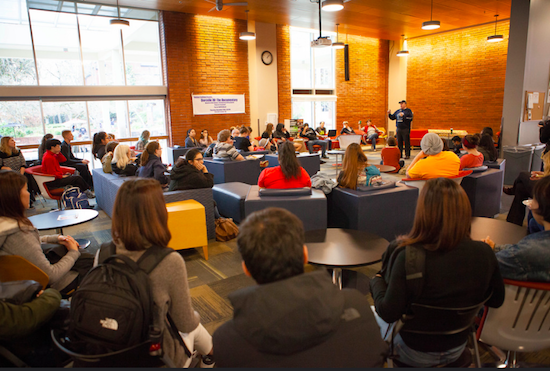 Over five hundred students crowded into the University Center.  Dr. Currie facilitated the discussion, which lasted for nearly three hours.

Pacific University's Center for Gender Equity and the CPAS hosted guest lecturer Harris Zafar from 6:30 to 8 p.m. Dec. 5 in Taylor Auditorium, Marsh Hall. Zafar is a national spokesperson for Ahmadiyya Muslim Community USA, a professor of Islam history and doctrine at two different universities, a published writer and blogger, and author of Demystifying Islam: Tackling the Tough Question. Zafar talked about the current state of being for Muslim individuals in the United States and examined the rising political and cultural tensions Muslim people face. 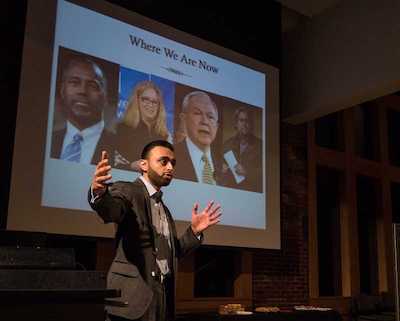 CPAS and the Center for Civic Engagement took the led in organizing the 2017 Martin Luther King, Jr. Celebration.  Unfortunately, after months of work with students and the community, the celebration was canceled because of snow and a ice storm.

CPAS co-sponsored four showings of the play VEILS in mid-February with the Department of Theatre and Dance.

The play charts “the friendship between two Muslim students, one American and one Egyptian, will unfold against the backdrop of the beginnings of the Arab spring. Veils by Tom Coash, is the winner of the 2015 American Theatre Critics Association's M. Elizabeth Osborn Award, a finalist for the 2015 Steinberg/ATCA Award, winner of the 2013 Clauder Competition, and a recipient of an Edgerton Foundation New American Play Award.”

Ellen Margolis noted that one of the showings sold out and that more students than normal attended the play.  She attributed to the nature of the play and CPAS' work to promote it with our social media networks. 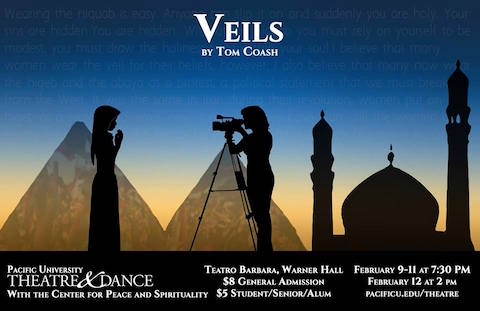 The director of the Center for Peace and Spirituality, Dr. Currie, also serves as the University Chaplain and in that role provides pastoral care for students, staff, and faculty. Dr. Currie provided pastoral care for students this year facing relationship issues, grieving the loss of parents and friends, and students who had experienced sexual assault.  Tragically, Pacific lost two recent alumni this year and a staff member. Pastoral care was provided for numerous students, staff, and faculty in all three cases.  Dr. Currie conducted two funerals – one for a staff member and one for the spouse of a staff member  - during the academic year.  Also, Dr. Currie presided over the four Alumni Remembrance Ceremonies conducted over the course of the year. He provided the invocation at Convocation and the Veteran’s Day Observance.

Dr. Currie was also invited to attend President Barack Obama’s final address in Chicago in mid-January and in June traveled to Oakland to keynote a conference on addressing homelessness. 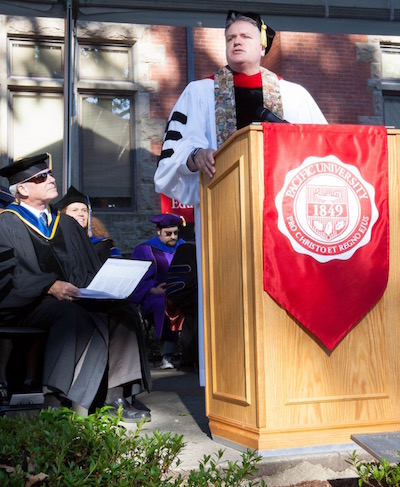 The CPAS social media accounts – Facebook and Twitter - are among the most active in the Pacific community. CPAS’ Facebook page has more followers than any other University page (excluding the main University page).  CPAS uses social media to promote religious literacy, religious holidays, upcoming events and news stories related to war and peace.

Over 1400 people have “liked” the Facebook page.  The majority of those people are in the age range of 18-23 and live in Forest Grove.

Support the Center for Peace and Spirituality

You can make a gift to CPAS by talking with the university’s development office. Online giving is available— type "Center for Peace and Spirituality" into the "other" category on the drop-down menu.