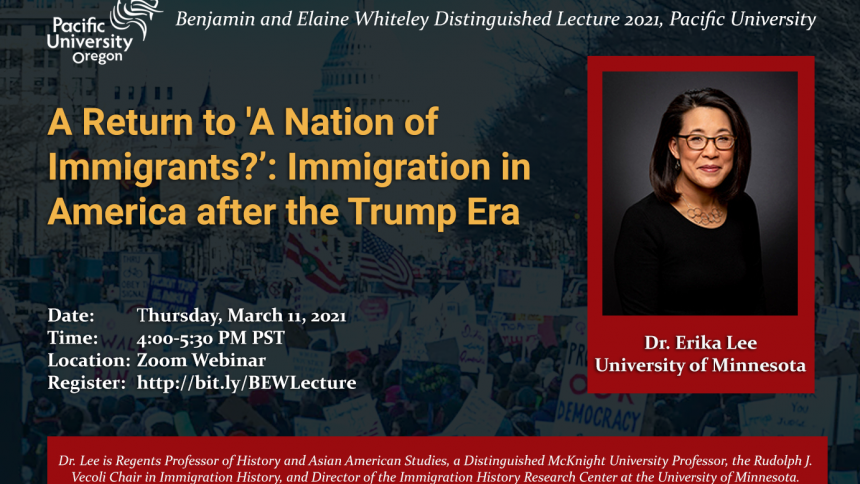 The School of Social Sciences is excited to announce its guest speaker for the 2021 Benjamin and Elaine Whiteley Distinguished Lecture at Pacific University. Dr. Erika Lee,  author, historian and educator at the University of Minnesota, will  present "A Return to 'A Nation of Immigrants?' Immigration in America after the Trump Era."

Donald Trump's presidency was characterized by travel bans, a border wall, and a record number of immigration policies that resulted in historically-low rates of immigration. Within days of taking office, President Joseph R. Biden reversed most of his predecessor's controversial immigration policies. But is it so easy to return the United States to its status as a nation of immigrants?

In this lecture, Dr. Lee will discuss our history as a country that has both welcomed and demonized immigrants and considers what this means for us today, drawing from her recent book America for Americans: A History of Xenophobia in the United States, which was awarded the American Book Award, the Asian/Pacific American Award for Literature, and the Richard Frisbie Honored Book Award for Nonfiction. Her previous book, The Making of Asian America: A History, was the recipient of the 2015 Asian Pacific American Award for Literature from the American Library Association.

Register in advance to attend this event via Zoom. There will be a question-and -answer session following the lecture.

The Whiteley lecture is named for  longtime Portland business, civic and philanthropic leader Benjamin Whiteley, Hon. ’01, who was a Pacific University trustee emeritus until his death in 2017.