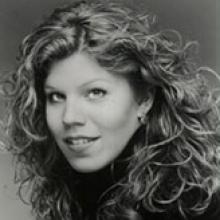 Angela Niederloh, mezzo-soprano, has been acclaimed by the New York Times as, “a charismatic mezzo soprano.” She recently made her Portland Opera debut as Melibea in Il viaggio a Rheim. A recent participant in the Houston Grand Opera Studio, Ms. Niederloh was last seen as Meg Page in Falstaff, Karolka in Jenůfa and Second Lady in Die Zauberflöte. Other roles include Flora in La Traviata, Rosette in Manon and Olga in The Merry Widow. Other operatic engagements for the American artist include Dorabella in Cosi fan tutte (San Francisco Opera Center), The Mother in Amahl and the Night Visitors (Opera Omaha), Annio in La Clemenza di Tito, and Mrs. Slender in Salieri’s Falstaff (Wolf Trap Opera).

An active participant in many of the nation’s most respected competitions, Ms. Niederloh was a national finalist in the 2000 Metropolitan Opera National Council Auditions, winner and audience favorite in the Eleanor Lieber Award Competition, second place in the MacAllister Vocal Competition, second place in the Dallas Opera Guild Vocal Competition, and finalist in the McCollum Vocal Competition.
Upcoming engagements include performing with Portland Opera, Boston Baroque, and Portland Baroque Orchestra. Ms. Niederloh is also actively sought after nationally for music clinic workshops for choirs and individuals and currently serves as a faculty member at Pacific University.