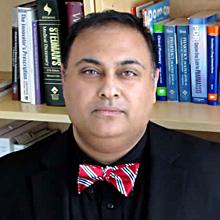 Dr. Malhotra serves as assistant professor of pharmacology at the School of Pharmacy at Pacific University in Oregon. He is a combination pharmacist and molecular pharmacologist and has worked in academia for a decade. He has a strong record of research publications, book chapters, and research funding with an expertise in mitochondrial pharmacology. He has served as an invited grant reviewer for governmental programs conducted by the National Science Foundation (NSF) and other private foundations for funding biomedical research in the United States.  He has served as Chair of the national Sub-Committee on Strategic Planning for the Biological Sciences Section of the American Association of Colleges of Pharmacy (AACP). He is the School of Pharmacy’s Past Chair of Assessment, and the Chair Elect of Diversity of the College of Health Professions. He is the recipient of the 2016 Pacific University Junior Faculty Award, the 2016 AACP Teacher of the Year Award, and along with his colleagues, the 2014 AACP Innovations in Teaching Award. Before joining Pacific University, he worked at the NYU School of Medicine for five years and the New York Methodist Hospital for two years. He has trained Postdoctoral Fellows, graduate and undergraduate students at Pacific University, and at the NYU School of Medicine. He is invested in the provision of training opportunities to minorities underrepresented in the sciences to promote diversity and enjoys teaching pharmacology to prospective PharmD students. He has published papers and research posters with Pacific University student participation, and welcomes interest in his lab. For training opportunities with Dr. Malhotra, or Dr. Badejo who works in the Malhotra lab, please contact Dr. Malhotra directly.

AUD 513 | Pharmacology and Mechanisms of Ototoxicity

2008 | FPGEE Certification, National Association of the Boards of Pharmacy USA

I have two main areas of interest: (1) a pediatric cardiomyopathy called Barth Syndrome and (2) pancreatic cancer. In summary, I employ lipidomics and molecular pharmacology for an elucidation of disease mechanisms.

Barth Syndrome: In cardiomyopathy research, I investigate the molecular pathology of Barth Syndrome (BTHS). BTHS is a rare but fatal, X-linked dilated cardiomyopathy and skeletal myopathy arising due to mutations in the tafazzin gene, the protein product of which is a mitochondrial enzyme of the same name. My work has demonstrated that tafazzin is a transacylase responsible for remodeling the mitochondrial inner membrane phospholipid cardiolipin (CL). We also showed that mutated tafazzin caused myopathic mitochondrial aberrations. Specifically mutated tafazzin containing mitochondria had alterations in lipid profile and evinced cristae membrane collapse involving degenerate supramolecular protein assembly. There were also discrepancies in protein distribution of complex V (ATP synthase) and tafazzin in the mitochondrial supramolecular complexes and therefore perhaps delinquent cristae membrane packing. That this was relevant in the context of cardiocytes was demonstrated when we showed that tafazzin mutations affected mitochondrial development during cardiocyte differentiation. Further, in lymphoblasts obtained from BTHS patients, delinquent CL remodeling was accompanied with mitochondrial accrual of monolysocardiolpin (MLCL), the monodeacylated form of CL. Importantly, we provided evidence that MLCL accumulation could be reversed employing small molecule regulators of calcium independent phospholipase A2, suggesting that in addition to deficient membrane packaging, MLCL amassment was a crucial intracellular lesion in this syndrome. In my current work at the Pacific University School of Pharmacy, I am interested in the development and validation of putative translational therapeutics for Barth Syndrome (BTHS). I will explore the following two broad areas: (1) the role of acute and chronic inflammation in cardiomyopathy and (2) the regulation of mitochondrial calcium in BTHS. For these, I will employ molecular biology, lipidomics and proteomics tools.

Pancreatic Cancer: A recent area of research interest is investigation into the development and progression of pancreatic cancer. Although rarer than other forms of cancer, pancreatic carcinoma has a poor prognosis since it is usually discovered late. Of the many types of pancreatic neoplasia, I am interested in understanding the mechanistic development of pancreatic ductal dysplasia. In particular my emphasis is on the identification of natural compounds that cause apoptosis in pancreatic cancer cell lines. At the Pacific University School of Pharmacy, I aim to explore alterations in intracellular signal transduction pathways downstream of treating cells with natural compounds such as Diindolylmethane (DIM), Neem leaf extracts and other pharmacognostic agents. These exploratory studies will serve to provide preliminary data for translational therapeutic discovery.

American Association of the Colleges of Pharmacy (AACP )

2014: Turner B, Grover  A, Malhotra A.  “The clinical management of pancreatic cancer” in US Pharmacist.

The School of Pharmacy is excited to announce that Dr. Leslie Devaud has been awarded a $30,000 grant from the Collins Medical Trust to support her research on the establishment of a zebrafish colony at Pacific University.