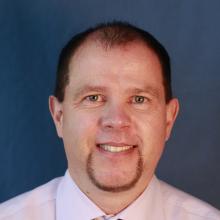 Dr. Lonsberry was named the Pacific Eye Clinic Portland Director in 2005. Prior to joining Pacific University he was an assistant professor at Southern College of Optometry, where he was the instructor for Anterior Segment Disease courses and named Teacher of the Year for 6 years in a row. During his time at SCO, he completed a Masters in Education degree with an emphasis in Post-Secondary Education.  Dr. Lonsberry also practiced at a vitreoretinal surgery and low vision rehabilitation practice.

Born in Rossburn, Manitoba, Canada, indulges his creative side by remodeling and renovating his personal spaces. His edgy sense of style is evident in his renovated home.

What does he enjoy most about teaching at the College of Optometry?

"I enjoy the opportunity to work with talented colleagues and educating motivated enthusiastic students."