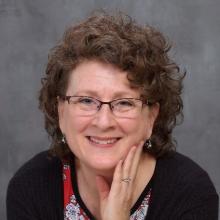 Carol Zolkewitz Rymer is an Associate Professor for Pacific University College of Optometry.

Colonel (Retired) Carol Zolkewitz Rymer, OD, MBA, FAAO recently completed 27+ years of military service as an active duty Optometry Officer in the United States Army. Her tours of duty have taken her all over the continental United States, as well as serving in Hawaii as the Pacific Rim Regional Optometry Consultant and Chief of Optometry Services.

Dr. Rymer graduated from Pacific University College of Optometry in 1992 with distinction and entered active duty service as a direct commission officer after receiving a military Health Profession Scholarship.  She is a graduate of San Diego State University, where she received her BS in Biology in 1982.  In 2001, Dr. Rymer completed an optometric residency in Family Practice and a Master’s in Business Administration at Northeastern State University in Oklahoma, graduating with honors.  She is a graduate of the Army Command and General Staff College and has received numerous military honors to include the Legion of Merit.  She holds the highest level of proficiency designation in the Army Medical Department “A” and was inducted into the Order of Military Medical Merit in 2013.  Notably, she was the first female Army Optometrist to achieve the rank of Colonel.  Additionally, she received her fellowship into the American Academy of Optometry in 1998.

Clinical leadership, graduate medical education and healthcare management have been the platform of Dr. Rymer’s military career.  She served as chief for various sized clinical settings, managing patient populations exceeding 100K enrollees, as well as led graduate medical education programs as a residency supervisor and director for the Army Residency programs.  On three separate opportunities, she served as the regional consultant for the Army Surgeon General’s Optometry Consultant in the Atlantic, Pacific Rim, and Central Regions.  Her career culminated as she led a DoD Department devoted to closing medical gaps for our Service Members in battlefield ocular and neurosensory trauma.

Continually staying involved with professional Optometry, Dr. Rymer served on the American Academy of Optometry Admittance committee from 2000-2004 and continues to volunteer her time to the American Council of Optometric Education as a team member for residency site accreditation surveys. Dr. Rymer served on the Armed Forces Optometric Society (AFOS) from 2003-2011 as the Chair of the Awards’ Committee – “Awarding those that Deserve.”   She has maintained active membership continually since graduation in the American Optometric Association and received the AFOS Junior Optometrist of the Year award in 2002.  She has lectured at numerous venues both locally and nationally, to include the American Academy of Optometry and Pacific University’s Victoria Conference. Most recently she will be serving on the Oregon Optometric Physician’s Association Advocacy Committee.

Originally a native of Southern California, Dr. Rymer and her husband and daughter most enjoy being close to the ocean in any way, shape or form!  In her spare time, she loves to volunteer for Girl Scouts and local non-profits.

What does she enjoy most about teaching at the College of Optometry?

"Being able to take all the clinical skills and leadership experiences that I have learned along my journey and share those with students through education and mentorship. It is so fulfilling to be able to give back, not only to our amazing profession and grow the bench, but to be home again at Pacific and give back to my grass roots."