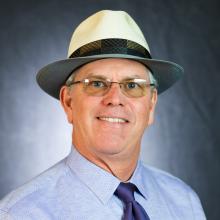 Dr. Eakland served as the associate dean for clinical programs at the College of Optometry from 1999-2013 and served as interim dean in 2006. In that role, he oversaw the management of the college's network of five community clinics within the greater Portland area. He also served as the externship director, where he was responsible for curriculum and development of more than 100 external sites for College of Optometry students. These sites are located throughout the United States, Canada, Australia and Germany. He also served as the residency director for the nine residency programs affiliated with Pacific University College of Optometry. As residency director, he was responsible for the overall coordination and development of post-graduate residency programs.

He has been instrumental in the development and teaching of the Advanced Ocular Therapeutics course and Injectibles Workshops for the Oregon Optometric Physician Association (OOPA). He was honored by the OOPA as Optometrist of the Year for 2005.

Dr. Eakland is well known for his interest in cutting-edge technology. He is a popular speaker throughout the United States and Canada. His information-rich lectures, rapid-fire lecture style and creative use of presentation technology keeps the audience glued to their seats.

He plays as hard as he works. He is a Kite Buggy enthusiast and spent a recent Thanksgiving break at the "Dead Bird Buggy Bash," a kite buggy regatta held each November over the Thanksgiving holiday in Galveston, Texas.