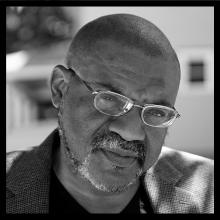 Kwame Dawes is the author of twenty-one books of poetry and numerous other books of fiction, criticism, and essays. His most recent poetry collection, Nebraska, appeared in 2019. In 2016 his book, Speak from Here to There, a co-written collection of verse with Australian poet, John Kinsella, appeared along with When the Rewards Can Be So Great: Essays on Writing and the Writing Life, which he edited. His collection, City of Bones: A Testament, appeared in 2017. Also in 2017, Dawes co-edited with Matthew Shenoda, Bearden’s Odessey: Poets Responding to the Art of Romare Bearden. His awards include the Forward Poetry Prize, The Hollis Summers Poetry Prize, The Musgrave Silver Medal, several Pushcart Prizes, the Barnes and Nobles Writers for Writers Award, and an Emmy. He is Glenna Luschei Editor of Prairie Schooner and is Chancellor Professor of English at the University of Nebraska. Dawes serves as the Associate Poetry Editor for Peepal Tree Books and is Director of the African Poetry Book Fund. He is Series Editor of the African Poetry Book Series and Artistic Director of the Calabash International Literary Festival. In 2018, he was elected a Chancellor of the Academy of American Poets and a Fellow of the Royal Society of Literature. Dawes was recently named as a finalist for the 2022 Neustadt International Prize for Literature. He also recently assumed the editorship of American Life in Poetry.