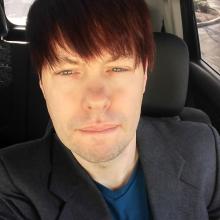 Master of arts in Spanish, University of Arizona, Tucson, AZ 2002

I enjoy teaching all levels of Spanish.

In my upper division courses, lately I have been concentrating on the teaching of Spanish through film. I enjoy teaching film because while learning about film, we can explore culture, history, politics, and innumerable societal issues, some universal, and some particularly related to the Spanish-speaking world.

I am currently working on presentations/publications related to gender identity and queer studies in Latin American film, and I almost always include at least a couple of the films I write about in my upper division film courses.

I am particularly interested in the use of technology in the classroom and in my film class students write blogs (analytical and creative) about the films we watch. I am also working on a multimedia project to help students improve their Spanish through cooking and the gastronomy of the Spanish-speaking world. I recently spent a sabbatical traveling and eating my way through Spain, while conducting interviews of people as varied as a cheesemaker in the mountains of Asturias to a Michelin-star restaurant owner in Castilla-La Mancha.

I believe strongly in interdisciplinary studies and have led several short-term study abroad courses with professors from other disciplines, such as a course I currently teach in Spain with writing professor Brent Johnson and a course I lead in Ecuador together with Mike Charles from the College of Education.

Boycoff, Jules and Marcus Welsh. “Chara! Chara! Chara! Timbers’ Midfielder, Diego Chara on Growing Up in a Soccer Family in Colombia and His New Family in Portland.” Published interview in Street Roots. 18 July 2014 in print. 25 July 2014 online. [I was present during the interview conducted by J. Boycoff, translated the interview from Spanish to English, and was credited as a co-author of the article.]

2018. Conference participant and presenter. “Using Blogs As An Extension of the Classroom.” The Oregon Technology in Education Network Annual Conference, Pacific University, February 24.