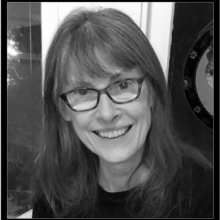 Mary Helen Stefaniak’s fiction and nonfiction have appeared in many publications. Of her new novel, The World of Pondside, a mystery that takes place in a nursing home, Booklist said, “Stefaniak infuses an often forbidding and depressing environment with joy and dignity.” Her second novel, The Cailiffs of Baghdad, Georgia, received a 2011 Anisfield-Wolf Book Award for Fiction. Anisfield-Wolf Awards recognize books that make significant contributions to our understanding of racism and our appreciation of the diversity of cultures. Independent booksellers selected The Cailiffs as an Indie-Next “Great Read.” Her first novel, The Turk and My Mother, received the 2005 John Gardner Fiction Award and has been translated into several languages. It was named a Favorite Book of 2004 by the Chicago Tribune. Self Storage and Other Stories, her first book, received the Wisconsin Library Association’s 1998 Banta Award.

The University of Iowa Press will publish her first book of nonfiction, The Six-Minute Memoir: Fifty-Five Short Essays on Life, in 2022, its essays selected from a column she began writing in 1998.

Mary Helen is Professor Emerita of Creative Writing at Creighton University in Omaha. She has taught fiction writing in Ireland, in China, and in the Iowa Summer Writing Festival. She and her husband have lived in Iowa City since 1982. Their three remarkable children grew up there.

Thoughts on Workshop: The job of your colleagues in workshop is to read your pages carefully and respectfully and to let you know what they see, hear, smell, taste, feel, understand and/or fail to understand on those pages. It is a truism (and also, as it happens, a fact) that you will learn more from participating in the discussion of other people’s work than you learn from the discussion of your own.  You’re going to get many wrong ideas from your readers, but they will often lead you to the right ideas. A successful workshop is one that makes you, the writer, eager to dive back into the writing—whether to revise or to start anew. A really great workshop makes everyone else in the room feel the same.