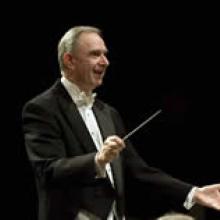 Michael Burch-Pesses is director of bands at Pacific University in Forest Grove, Oregon where he conducts the Wind Ensemble, Jazz Band, and Jazz Choir, and teaches courses in conducting, music education, and MIDI technology. He also works with the Pacific University School of Education, supervising music education interns during their student teaching as they earn the master of arts in teaching degree. He holds master of music and doctor of musical arts degrees in conducting from the Catholic University of America in Washington, D.C. Since coming to Pacific University in 1995 he received the Junior Faculty Award (1998) and was named a Wye Fellow of the Aspen Institute (1999). In 2006, he received the S.S. Johnson Foundation Award for Excellence in Teaching.

He enjoyed a distinguished career as a bandmaster in the U.S. Navy before arriving at Pacific University, enlisting as a hornist and working his way up through the ranks to become the Navy's senior bandmaster and head of the Navy Music Program. During his Navy career, he served as leader of the Naval Academy Band in Annapolis, Md. Under his direction, the Naval Academy Band received the George Howard Citation of Musical Excellence from the John Philip Sousa Foundation, the highest civilian award for a military band. He also served as assistant leader of the Navy Band in Washington, D.C, and director of the Commodores, the Navy's official jazz ensemble.

An internationally active adjudicator, lecturer and clinician, he has conducted festival and honor bands throughout the United States, Canada, South America, Europe, Asia, and Australia.  In 2000 he conducted the British Columbia All-Province Honour Band, and in 2002 he adjudicated the National Concert Band Festival of New Zealand.

Dr. Burch-Pesses also is the conductor and musical director of the Oregon Symphonic Band, Oregon's premier adult band. The band celebrated its 20th anniversary with a performance at the Midwest Clinic in 2006. The following year the band was awarded the Sudler Silver Scroll by the John Philip Sousa Foundation. The Oregon Symphonic Band is composed primarily of musicians from the Portland/Vancouver area. Men and women of many professions are represented in the ensemble, which performs three concert series annually and has appeared in concert at numerous state, regional, and international music conferences, including the prestigious Midwest Clinic in Chicago. His performance at the Midwest Clinic resulted in his being awarded the Citation of Excellence from the National Band Association.