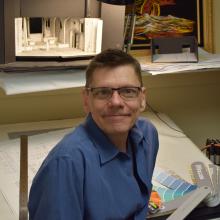 Tal Sanders holds an MFA in design from California Institute of the Arts. An assistant professor of theatre, he serves as faculty scenic and lighting designer as well as technical director for Theatre and Dance at Pacific University.

Previously he held the position of faculty scene designer and lecturer at University of California, Santa Barbara.  Professor Sanders also served as assistant professor and technical director for Marymount Manhattan College in N.Y.C.

Tal is an award-winning designer with numerous national credits. In the last eight years he has designed for nearly every venue in the Portland Metro area, and has been awarded the Drammy Award for his designs on several occasions. Tal is also a seven-time winner of the Santa Barbara critics’ Independent Theatre Award. He is a member of the United Scenic Artists, and has designed lighting and scenery for many aspects of entertainment including: theatre, film, television, theme parks, concert stages, cruise ships, mall décor, and zoos. In Los Angeles, Tal designed for the Mark Taper Forum and the Taper Too, the Ahmanson Theater, the Crystal Cathedral, the Hudson Theatre, the Elephant Space, the Tivoli Theatre, Royce Hall, and others. His Regional Theatre designs include: Pacific Conservatory for the Performing Arts, North Shore Music Theatre, Santa Barbara Civic Light Opera, Long Beach Civic Light Opera, and others. In New York City, Tal has worked both on and off-Broadway including: the Vivian Beaumont Theatre, the Vineyard Theatre, Playwrights Horizons, and the Irish Arts Center.

As art director and technical director for Universal Studios Hollywood, Tal designed many shows and events including Halloween Horror Nights, The Millennium Party for New Year’s Eve 2000, The Chipmunks Meet Frankenstein, The Blues Brothers 2000 Revue, and also served as Entertainment Technical Director for the implementation of the T2/3D attraction. Tal also served as lead designer for Gothic Moon Productions, an Orange County-based design firm where he designed multiple events and a variety of television commercials.