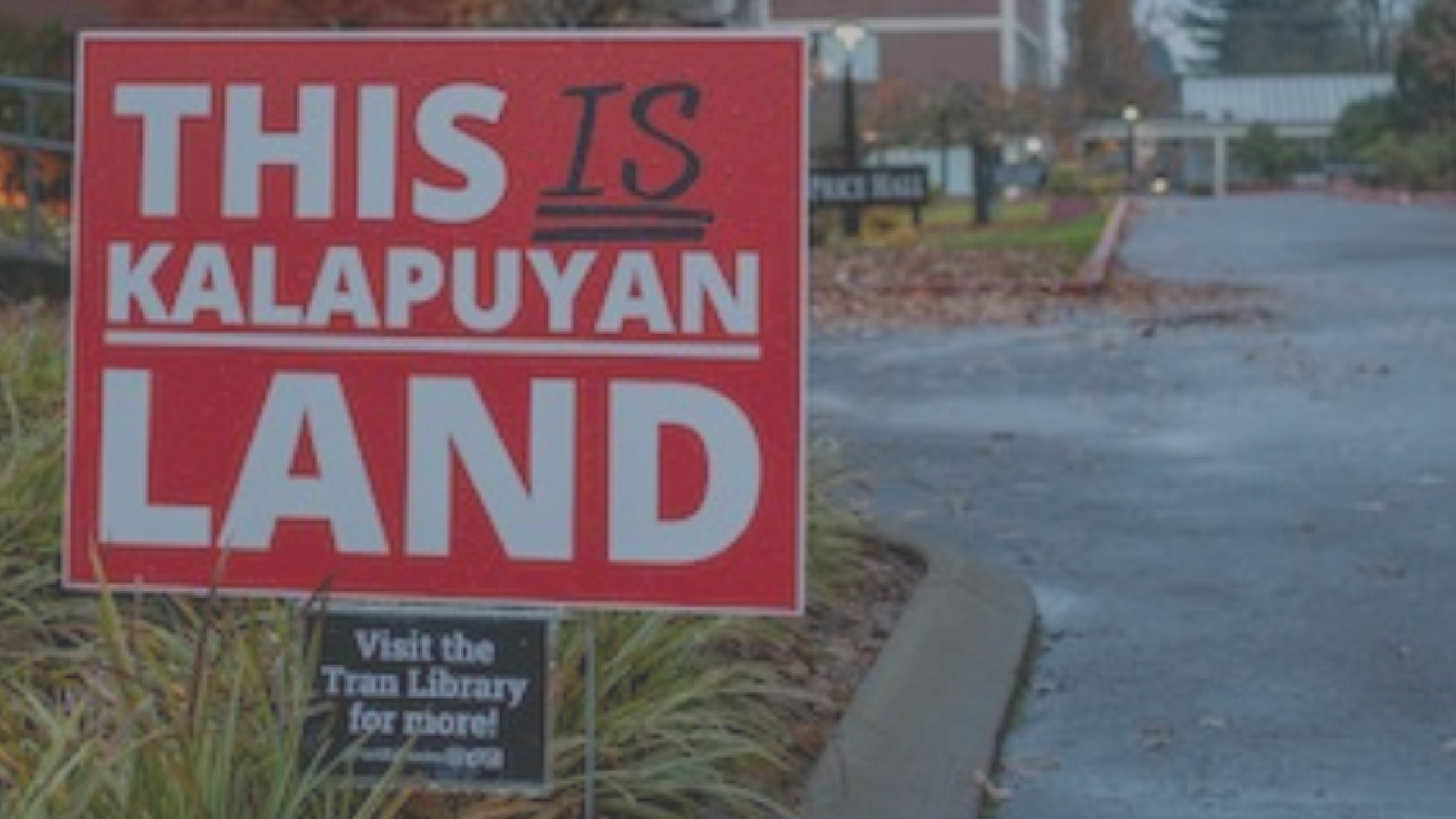 Land acknowledgments are formal statements, often spoken at the beginning of public events, that recognize the event is taking place on the land of Indigenous people. This page has been put together by Pacific University’s Indigenous Engagement Committee to aid fellow Pacific community members to engage in thoughtful reflection about the land where we live and work, as well as how we connect with Indigenous communities today. While it is important to acknowledge the land, it is even more important to take concrete steps towards supporting current Indigenous communities.

Whose Land Are We On?

Pacific University’s Forest Grove and Hillsboro campuses are located on the land of the Tualatin Kalapuyas, who called themselves the Atfalati. They are now part of the Confederated Tribes of Grand Ronde.

Pacific University’s Eugene Campus (located at Lane Community College’s Main Campus) is located near the intersection of the lands of the Chafan, Chelamela and Winefelly Kalapuyas. They are now part of the Confederated Tribes of Grand Ronde.

Pacific’s Hawai’i Office is on the land of Native Hawaiians.

Pacific University’s Portland Office is on the land of Chinookan tribes who lived near the intersection of the Willamette and Columbia Rivers. Today, their descendants are part of the Confederated Tribes of Grand Ronde, the Yakama Nation, and other tribal nations.

Pacific University’s Woodburn Campus is located on the land of Ahantchuyuk Kalapuyas. They are now part of the Confederated Tribes of Grand Ronde.

For sources and additional readings, see Additional Resources below. If you are located somewhere other than the campuses above, we encourage you to conduct your own research or contact archives@pacificu.edu for assistance in finding sources.

Writing Your Own Land Acknowledgement Statement

Land acknowledgement statements vary widely across places and peoples and there is no singular consensus about the contents or the length of such statements. The most effective and meaningful statements account for the events where they are shared and the audience, honor those who came before the arrival of European re-settlers, and recognize the cultures and practices of tribes who continue to live here. Consider the following for your own statement:

For additional thoughts on land acknowledgements by Indigenous authors, see the Additional Resources section below.

Example of an acknowledgment spoken on the Forest Grove Campus:

Pacific University is located on the colonized land of the Tualatin Kalapuyas, who called themselves the Atfalati. The people of this tribe are now a part of the Confederated Tribes of Grand Ronde. We are committed to engaging in an active effort to cultivate relationships with Indigenous communities within and around Pacific University.

Example from an email co-authored by people on three campuses:

We respectfully acknowledge that we are writing to you from the traditional lands of the Atfalati (also known as the Tualatin Kalapuyas), who lived around what is now Forest Grove and Hillsboro; and from the lands of the Chafan, Chelamela and Winefelly Kalapuyas, who lived around what is now Eugene. These Kalapuyan peoples are all now part of the Confederated Tribes of Grand Ronde. To acknowledge this land is to recognize its longer history and our place in that history; it is to recognize these lands and waters and their significance for the peoples who lived and continue to live in this region, whose practices and spiritualities were and are tied to the land and the water, and those whose lives continue to enrich and develop in relationship to the land, waters and other inhabitants today.

Example by a speaker in Hillsboro via Zoom:

I would like to take a moment to acknowledge the land on which I sit and invite each of you to reflect upon the land on which you sit. I am here in my home in Hillsboro. This is the land of the Atfalati bands of the Kalapuyan people. The Kalapuyans were removed from this land in the 1850s and are now part of the Confederated Tribes of the Grand Ronde. It is nearly time for us to plant our garden and I think often of how this rich soil that offers us so much, was made richer by the Kalapuyan people who shaped this land. I invite you all to think now, or at some point today about the people on whose land your home is built and their contributions to all of our lives.

Example spoken in Forest Grove including an introduction of the speaker:

Before we begin, I want to acknowledge something that may be obvious from looking at me: I am not Native. My ancestors were colonizers. I am coming to you as an historian who has learned most of what I know through reading, research, and listening, rather than through my own personal experiences. As we start talking today I want to be sure to think about the people on whose land we are standing: the Atfalati, who became part of the Confederated Tribes of Grand Ronde, where they still are today. We need to listen to them when they speak about their experiences, because they are the authorities on their own history.

About the Indigenous Engagement Committee

This page was drafted by Pacific University’s Indigenous Engagement Committee.

The origins of this committee date to Fall of 2018, when the members of the Undergraduate Student Senate requested that President Hallick give a Land Acknowledgement during certain meetings and ceremonies of the University. In response to this request, a Land Acknowledgement Task Force was established in Spring 2019. The members read Native-authored publications about land acknowledgments; researched the tribal land connections of Pacific’s campuses; consulted with the Cultural Department of the Confederated Tribes of Grand Ronde; and thought about some of the ways in which Pacific could make a Land Acknowledgment statement be “more than words.” All members agreed that a Land Acknowledgment Statement should reflect real change in how Pacific engages with Indigenous issues. The first Commencement address to contain a Land Acknowledgement was given by President Hallick in Spring 2019, following recommendations of the Task Force. Other recommendations of the Land Acknowledgment Task Force have also been implemented, including the repatriation of some artifacts from Pacific’s Museum collection to Grand Ronde and the creation of online resources such as this one. Much more work remains to be done, however.

In Fall 2020, the Land Acknowledgment Task Force became a standing sub-committee of the University Diversity Committee, under a new name: the Indigenous Engagement Committee. Operating under a shared leadership model, the IEC is composed of UDC members and other representatives from the Pacific University community including students, staff, faculty and alumni. Throughout its work, the Indigenous Engagement Committee seeks to work in consultation with the Confederated Tribes of Grand Ronde.

The Indigenous Engagement Committee’s charges include (as of 2021):