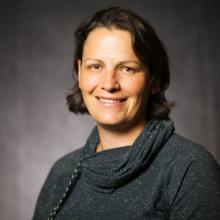 Currently, I enjoy teaching a rotation of all of the above courses listed and more! My research interests include: French Films, contemporary French and Francophone literature and culture, autobiographical narratives, women's literature, feminist and gender studies, and gay & lesbian studies.

I was born and grew up in Metz, Lorraine, France, and spent my summers in Charente-Maritime. I continue to spend a good portion of my summers in France, visiting with family in Rouen, Paris, Royan, Lyon, and Metz. At age 20, I left France to spend a year in Epsom, Surrey, England, where I continued my studies and served in a local high school as a language assistant. I loved the study abroad experience so much that I went on to spend five years as a French language teaching assistant at the University of Cincinnati. During those years, I completed a doctoral degree in French and Francophone literatures with a graduate certificate in women’s studies. I keep a fond memory of the teaching seminars I took under the supervision of Dr. Judith Muyskens, a renowned expert in the field of French language pedagogy. I first taught four years as an assistant professor at Central Michigan University before moving to Pacific University in 2007. At Pacific, I am very appreciative of teaching smaller classes as there is time for each student to become fluent when he or she majors in French. I am now a dual citizen and thus, am passionate about discussing cultural differences and world perspectives with my students and French language teaching assistant, in class as well as during office hours and numerous French Club excursions. My research and publications focus on French and Francophone literature written by women. During my recent sabbatical, I wrote an article and conducted an interview with French author Marie Nimier for the French Editions Passage(s) and wrote an article for The French Review , titled "Film Adaptations of Thérèse et Isabelle and Le bleu est une couleur chaude: Is It Time to Shift Our Gaze?" My wife and I have three young children, Eloïse, Lucie, and Maxime who are growing up bilingual and having great fun developing their language skills every day.

PhD Romance languages and literature, University of Cincinnati, Cincinnati in 2003

Graduate certificate in woman's studies in 2002

Master of arts in French, University of Cincinnati, Cincinnati in 1999

Preparation:
Preheat the oven to 340 F
Melt chocolate in double boiler (“bain Marie”); let cool a bit.
Beat the yokes with the sugar in a bowl until the mixture whitens, but do not let it foam.
Continue beating, first adding the melted chocolate, then the cream.
Pour the mixture in the crème brûlée bowls, filling them only ¾ of the way.
Bake in the oven for 25 minutes (may vary from oven to oven).
Check before removing: they should be set on the edges and shaky in the middle.

Cool down for at least 2 hours. Right before serving, heat the crème brûlée iron. Add pinches of brown sugar evenly over the entire surface. Gently burn brown sugar with iron.

Eat right away as brown sugar will soften if you let it sit.