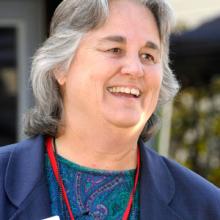 She has nurtured the development at Pacific University of centers specializing in peace and spirituality and in sustainability. Hallick has overseen the growth of programs in the liberal arts and sciences, in education, and in health professions, as well as the establishment of Pacific’s College of Business. She also is guiding the development of a university strategic plan that will support continued growth in student enrollment.

Hallick has a long history of commendation for her work as a teacher and researcher, and she has a unique breadth of experience working with diverse groups in the academic, scientific and professional worlds. In addition to her leadership at Pacific University, she also serves on boards for the Oregon Historical Society, United Way and Vision Action Network.

Hallick also manages a 20-acre farm in Scappoose, Ore., with close friend Candace Carr, raising beef cattle and caring for a variety of other animals and welcoming visits from both of their extended families. Hallick’s daughter, Deborah, a computer engineer, lives in Eugene, Ore., with her children, Charlie and Samantha.