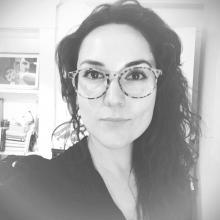 Ximena Keogh Serrano is an assistant professor of Spanish and Latinx Studies at Pacific University. Her areas of specialization lie at the intersection of Latin American and U.S. Latinx literary and cultural studies, and studies in gender and sexuality.

In her research, Dr. Keogh Serrano explores questions of borders and sites of liminality.  Interested in the representation of subjects “on the move,” she investigates the ways in which texts and bodies transit between and across linguistic and socially-framed borders of time, space and being. Her research is informed by feminist, queer and decolonial methodologies, and it moves across genres of literature, film, media, visual arts, and performance.

COURSES I TEACH
SPAN 211 Spanish for Heritage Speakers
SPAN 406 Political Dissidence in Literature, Film, and Music of the Americas
HUM 260 Latinxs in U.S. Pop Culture
HUM 360 Between Borders and Belonging: An Exploration of Latinx Texts and Beings in Transit