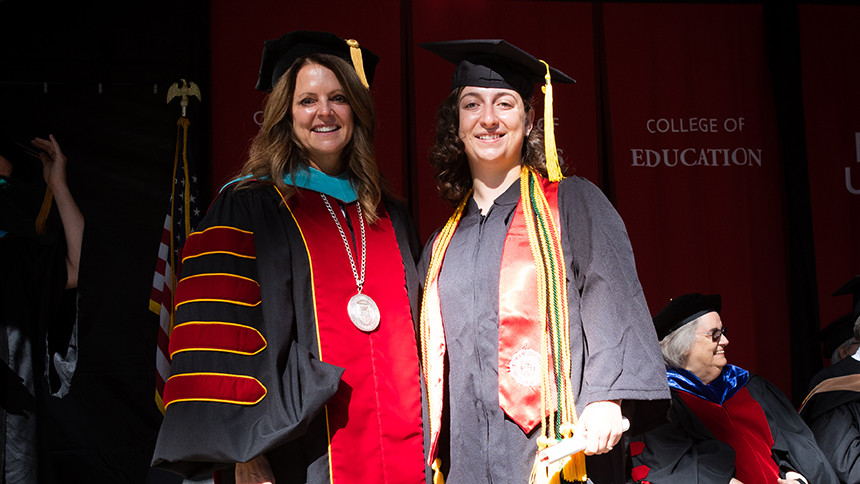 Janice Parks ’20 didn’t let a global pandemic get in the way of her career as a microbiologist.

Sure, her senior-year classes at Pacific University switched suddenly from traditional to virtual, from in-person to on-screen, and she and her classmates’ graduation ceremony was canceled indefinitely. Such ceremonies, like sporting events, concerts and restaurant outings, were casualties of the country’s sometimes-uncertain response to the spread of the coronavirus.

But while protocols were upended and long-established routines faltered, students still had careers to launch and futures to pursue. For Parks, the pandemic couldn’t interfere with her matriculation into a scholarly career on the frontiers of plant science at Washington State University, where she has completed two years as a PhD student.

Despite the unexpected detour imposed by the pandemic, Parks has followed an academic course that was laid out at Pacific, where she was a distinguished student. Two years beyond her actual graduation and well into her next-level academic career, Parks says she still brags about the quality of undergraduate research at Pacific.

“I was able to leave Pacific being able to write very prolifically and be a good scientific writer,” she said.

Parks, who went to high school in nearby Hillsboro, Ore., entered Pacific in 2016 thinking she wanted to work in a medical field. But the biology courses she took instilled in her an enthusiasm for scientific research, taught her how to publish scientific papers, and helped her to network with scientists in academic and private-sector research from around the world.

At Pacific, Parks was the first student to be awarded the Lesley M. Hallick Award for Leadership and Service. It’s given to students who demonstrate exceptional demonstrations of service over self. And at Washington State, she was awarded the prestigious ARCS Fellowship, which added $17,500 to her PhD student salary over three years and made it plain to her that the university was eager to recruit her to its plant science program.

In April, she, along with several co-authors, published her most recent paper, “Increasing Biodiversity and Land-Use Efficiency Through Pea (Pisum aestivum)-Canola (Brassica napus) Intercropping (Peaola),” in Frontiers in Soil Science, a biology journal. The paper illustrates her interest in promoting biodiversity and agricultural efficiency without relying on chemicals like phosphorus and nitrogen that degrade the soil. She is a microbiologist within WSU’s plant science program, so she applies a multidisciplinary perspective to her research and the way its findings can be applied.

“My research that I’m doing now is very focused on agriculture,” she said. “But I was able to convince Fish & Wildlife to let me present my research at one of their conferences, because I was able to show them that the work I’m been doing can be applied to restoration and conservation.”

The work isn’t just interesting to Parks and a handful of her peers: It has significant implications for the health of the earth.

“Through the work I’m doing now, I want to be able to show people how we can use microorganisms and harness the relationships that they already form with plants and with each other to improve out ways of approaching restoration, improve our ways of approaching agriculture, so we can be better stewards to this planet.”

Her career well under way, Parks still recalls how unsettling it was when the spread of the coronavirus brought her career at Pacific to a screeching halt.

That’s why she came back to Pacific’s Forest Grove Campus in August to attend Special Commencement — the in-person graduation ceremony that she and her classmates were forced to forgo two years ago because of the COVID-19 pandemic. Walking across the stage and accepting a “diploma” was beside the point: It was, rather, a chance to have a proper goodbye.

In the spring of 2020, Parks suddenly found herself cut off from the students and professors with whom she had been working so closely. She hadn’t had the chance to share her good news about being recruited to the Washington State plant science program. She hadn’t even been able to see — or give — a smile to her friends, because everyone she saw was masked, and physically distant.

The great appeal of Special Commencement, she said, was that she had the chance “to actually say goodbye and catch up to people,” she said. “And see their faces.”