When Mike Rushfeldt ’95 was applying to colleges, he knew that he wanted to stay close to home, somewhere in the Portland area.

Although he applied, and was accepted, to several colleges and universities in the area, Pacific offered him the best financial aid package. But more than that, what tilted Pacific in his favor was that the school “just seemed more down to earth, a little more personal.” 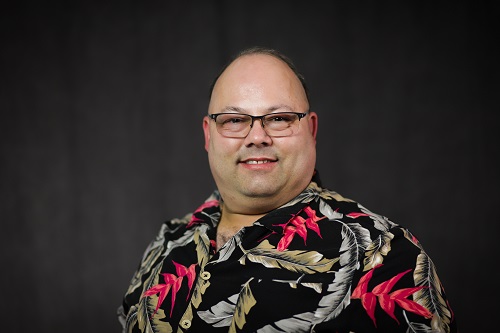 As a student, Rushfeldt double majored in physics and mathematics and minored in philosophy. He still cites this ability to explore a wide variety of different subjects as one of the most important things he gained by attending Pacific. He took an Introduction to Philosophy course with Professor Emeritus Dave Boersema to fulfill a humanities requirement but fell in love with the subject and wound up minoring in it. Philosophy “really fits in well with science, and science with math,” Rushfeldt said.

He also had the opportunity to work with Professor Emerita Juliet Brosing for his senior honors thesis. At the time, Dr. Brosing was conducting research at the nuclear reactor at Reed College, and Rushfeldt was able to work at the reactor as well for his research. “That was one of the highlights for me — to have that kind of access,” he said.

“It was a great experience, and I would say that if I’d gone to a larger university, I wouldn’t have had the access to something like that.”

During the summer between his sophomore and junior years, Rushfeldt took a job with Pacific’s Facilities Department, helping to set up the newly opened Taylor-Meade and Strain buildings. The following summer he again took a job with Facilities, which, he said, “got me interested in facilities and engineering.”

Immediately after graduating, Rushfeldt returned to Facilities. Initially intending it to be another summer job, he ended up working at Pacific for six years in various positions in Facilities, Physics, and Optometry. A common thread among the positions was operations support and materials purchasing. That led to a job with TriMet, where he has now been working for almost 20 years in procurement, supply chain management, technical support and fleet maintenance operations.

Although Rushfeldt didn’t participate in many extracurricular activities while in school, he was a math and physics tutor, a lab assistant, and a TA during his senior year. And as an alumnus, he’s become very involved with the university. When he was an employee at Pacific, he sat on the University Council and served as chair of the Staff Steering Committee for two years. He received the University’s Outstanding Customer Service Award at the Faculty and Staff Awards Ceremony in 1999. He sat on the Alumni Association Board for several years, as well as the College of Arts & Sciences Advisory Council, and he attends athletic and performing arts events. Rushfeldt is also a self-proclaimed promoter of Pacific University, encouraging everyone he knows with kids to consider applying to Pacific.

Perhaps Rushfeldt’s biggest impact on Pacific, though, can be felt through his philanthropic activities.

In late 2011, Rushfeldt created the Michael Rushfeldt Physics Scholarship to support juniors and seniors majoring in physics who demonstrate academic excellence and financial need. Since the first award was made in 2012, the scholarship has provided seven students with more than $8,500 in scholarship support.

He was inspired to create the scholarship because he had received scholarship support while in school, and “thought it was a nice way to give back.”

Rushfeldt recognizes now that gifts from donors helped pay his way through college, and he wants to pay it forward.

“Or rather, in this case, pay it back,” he said. “Think about the fact that, by giving money back, you’re replenishing those funds so it allows another student that opportunity.”

“We are incredibly grateful for the support we have from Mike Rushfeldt,” Professor Andy Dawes, Chair of the Physics Department, said. “Our scholarship winners feel a strong sense of support from alumni like Mike who have shared in the Pacific Physics experience. I’m sure he remembers how hard the physics classes are and understands that some extra encouragement never hurt. I look forward to working with him to channel his continued support into student success in the Physics Department and beyond.”

In addition to his annual scholarship, Rushfeldt has also made Pacific University the beneficiary of his estate plan.

“Just seeing the power of what can be done, by anybody,” he said. “I’ve heard the stories, I’ve gone to the donor appreciation events, but you see the impact of some of these planned gifts and you realize, ‘I have a lot of assets, they’re just not liquid.’ Life insurance, pension funds, etc. I think it’s important for everyone to have an estate plan; I don’t want to see anybody else get this other than Pacific.”

Although he has yet to direct his planned gift toward a specific purpose, he hopes his gift will advance the university and help relieve the budget. He’d also like it to create some kind of legacy, “that way the name sticks around — an endowed scholarship, faculty chair, something,” Rushfeldt said.

“Once a Boxer, forever a Boxer.”