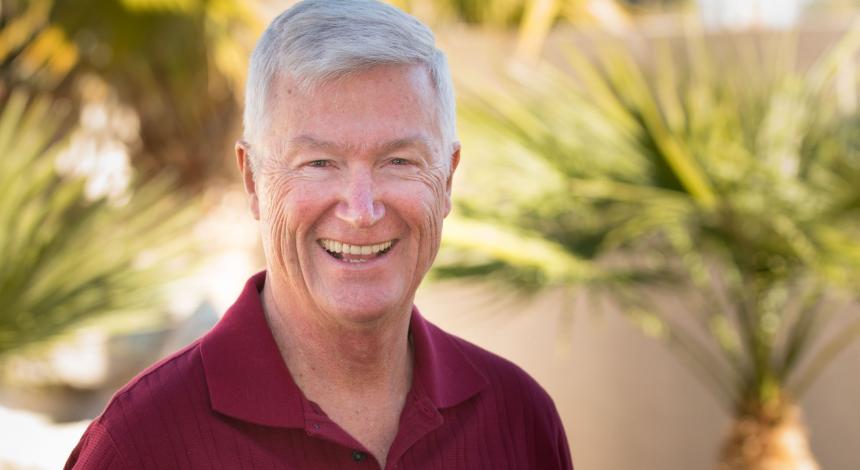 When Col. John Pyle OD ’64 graduated from optometry school at Pacific University, he thought he looked too young to go into clinical practice.

“I was 22 years old. I looked like I was still in high school,” he said. “I’m sure the little old ladies would come in and pinch my cheek and say, ‘Where’s the doctor?”

So, he decided to join the Army to gain clinical experience and credibility. A lifetime later, it’s a decision he has never regretted. Pyle retired in 1993 from the Office of the Surgeon General, following a steadily climbing career as a military optometrist.

After graduating from high school, Pyle spent a year at Washington State University before transferring to Pacific, where an uncle had completed optometry school about a decade earlier.

“I really had no idea what I wanted to major in. My mother said, ‘Why don’t you become an optometrist?’” he said. “As a freshman in college, I was very immature and stuff like that, and I said, ‘Why not?’”

He roomed with three other young men, all optometry students, and he said they had a great time learning and playing.

“We were known on campus as the four horsemen. I don’t know if that was infamous. We got the moniker from one of the guys I roomed with: His mother was a staunch Catholic and big Notre Dame fan, and that’s where that came from,” Pyle said.

Optometry school, at that time, was five years from high school go doctorate, and that meant it included less clinical experience that a similar degree today, Pyle said.

“One way to get clinical experience was to join the military, “ he said. “A lot of us ended up going into one of the branches of service.”

Having grown up in Juneau, Alaska, Pyle said he wanted to see the East Coast, so his “dream sheet” upon enlisting included locations on the Atlantic seaboard.

“The Army was very good to me. They sent me east — Far East,” he said.

He was first stationed as division optometrist for the 1st Cavalry Division in Korea, near the demilitarized zone.

“In one year, I learned an awful lot about the Army and decided to stay in,” he said. “The Army is a great place to be when there’s no war going on.”

Throughout his career, he served in a wide variety of positions. From 1979 to 1984, he was chief of optometry service at Fort Bragg, N.C., where he led his clinic to win the Army’s Best Optometry Clinic Award.

After that, he served as chief of the Optical Fabrication Laboratory at Fitzsimons Army Medical Center, which turned out 2,000 sets of eyeglasses a day.

“… As a result of his efforts, there was a significant improvement in every measure of performance, including a 33 percent reduction in the time to manufacture prescription eyewear,” according to the narrative accompanying a medal Pyle received upon retirement.

In 1989, Col. Pyle was selected commander and dean of the U.S. Army Medical Equipment and Optical School, helping realign training courses and leading the school to its first accreditation by the Southern Association of Colleges and Schools.

Later that year, he was chosen chief of Army Optometry and assistant corps chief of the Medical Service Corp, serving in the Office of the Surgeon General. Among the work he led at that time was the reinstatement of the Health Professional Scholarship Program for optometry students, as well as the deployment of modernized optometry medical equipment sets.

A photo from Getty Images shows him displaying eyeglass inserts for a gas mask — more than 500,000 of the inserts were fabricated for Operation Desert Storm during his tenure.

After retiring from the service in 1993, just after Desert Storm, Pyle went to work for Kaiser Permanente in California. After about five years, though, he suffered health problems and decided to retire for good.

He and his wife, Gerri, followed their children to Las Vegas, where the couple lives today. (Their grown children have moved on, one to Arizona and one to Texas, following a stint in Australia.)

Last fall, they returned to Pacific to celebrate Pyle’s 50-year reunion and induction into the Golden Guard.

“I was very happy with Pacific,” Pyle said. “Pacific was, and still is, a small school where, instead of being a number, you can become an individual. I had a really good time there.”