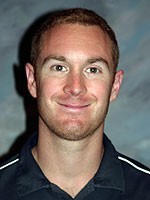 KATU News and the Royal Rosarians recognized Pacific University athletics trainer Eric Pitkanen as a Newsmaker of the Year on March 16 at the DoubleTree Lloyd Center Hotel in Portland. Pitkanen received the honor from KATU Chief Meteorologist and rosarian Dave Salesky.

Pitkanen was on the strip with the Boxer men’s wrestling team in town for a tournament on the early evening of Dec. 20, 2015 when a car struck numerous pedestrians, sending nearly 40 to local hospitals, including three students.

Pitkanen was among the first responders who provided medical aid to injured pedestrians in addition to fellow Pacific community members.

The Royal Rosarians annually honor heroes and heroines in the greater Portland community who have performed exceptional acts of heroism or benevolent service without regard for personal safety, public recognition, or personal gain. The newsrooms of prominent Portland area media select the Newsmaker honorees.