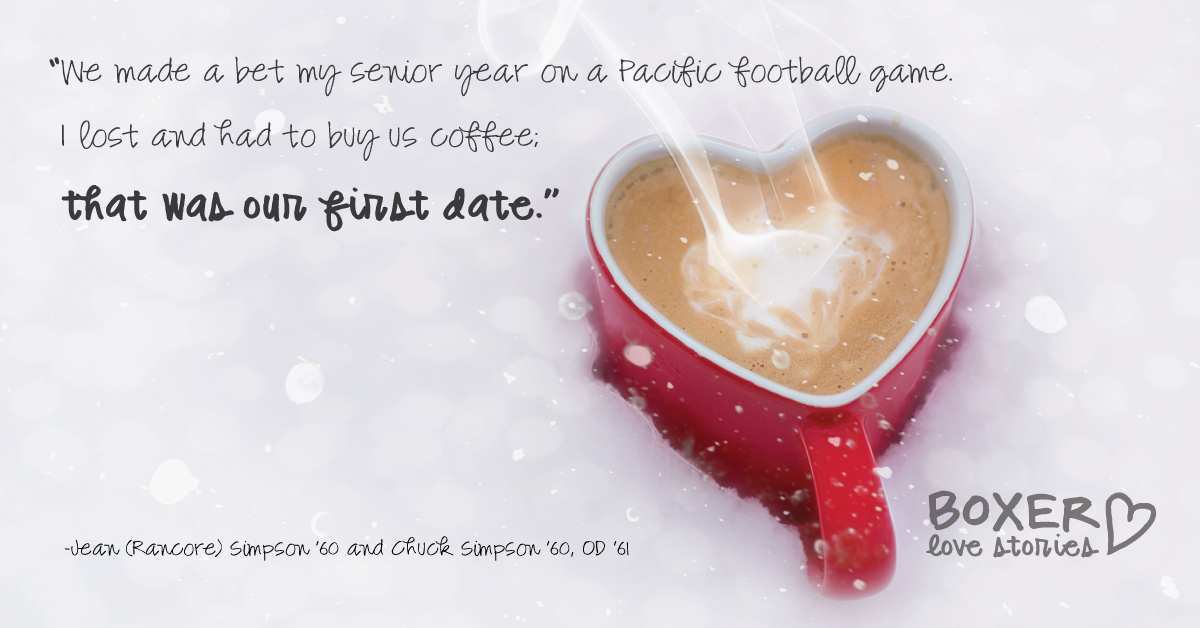 Chuck and I attended Pacific from 1956-1960. We worked at the movie theaters in Forest Grove to put ourselves through College. Chuck was an optometry student and I graduated as a secondary teacher. Meeting at the theater and working together for 3 years, we became good friends. I had a few different boyfriends at that time and never thought of Chuck in that way. We made a bet my senior year on a Pacific football game. I lost and had to buy us coffee; that was our first date.

He asked me to a dorm party for Christmas, and by the time Christmas break was over, he had asked me to marry him. I said yes but we didn't announce our engagement (because in those days, you announced it in a special way at a sorority meeting, etc.). My roommate had gotten engaged over vacation, and I didn't want to steal her thunder. I got my ring from Chuck on the second of February; he couldn't wait until Valentine’s Day as he had planned. We announced our engagement and planned an August wedding.  As the end of school approached, we decided separate summer homes and a big wedding was a waste of money, so we made plans for May 7.  We were married in Old College Hall on May 7, 1960 and spent a weekend honeymoon at the Oregon coast. We graduated with a BS a couple weeks later.  Another year at Pacific got Chuck his OD and boards passed. Then we left for the Army in Penn. where our 1st child was born.

We eventually settled in Baker City, OR (on the dry side) with 2 daughters and a very happy life. Chuck died in 2003, long before he should have. We had been married 43 years. I still remember our days at Pacific and wish he were here.