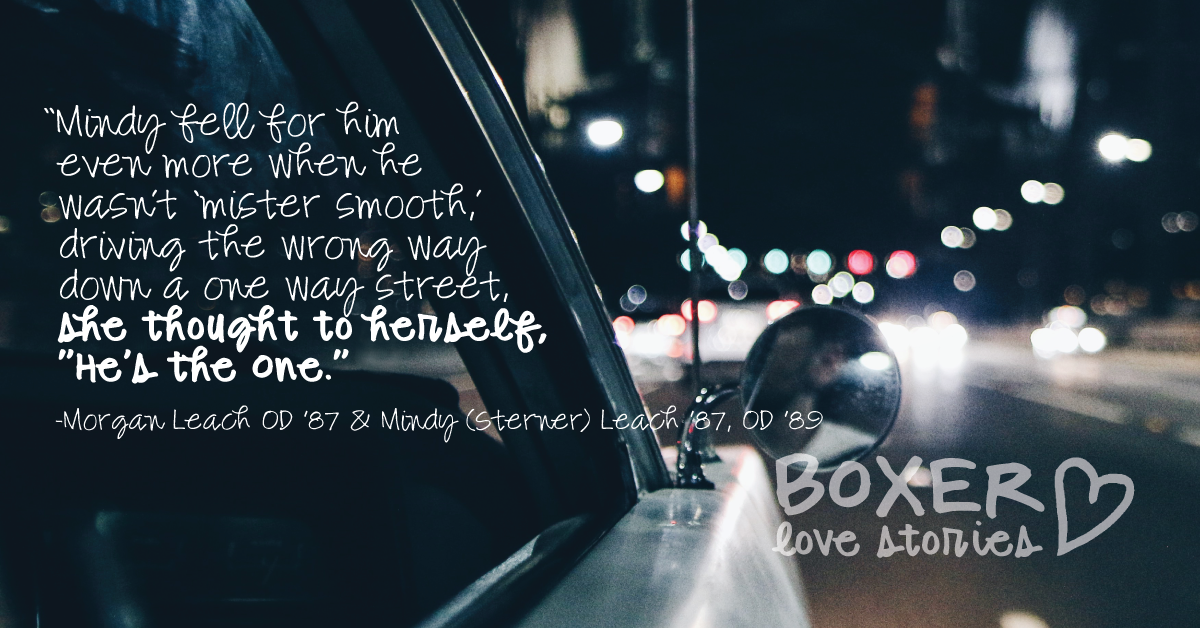 "Hey, there you are," Morgan said as if he had been looking for Mindy all night.

Usually they caught each others eye around Jefferson Hall where Mindy was a second year Optometry student and Morgan was in his 4th year.

But this was the Oppie Halloween party where Morgan came dressed as an Autolite spark plug along with the rest of his cool, confident gang. Mindy was dressed as Dorothy from the Wizard of Oz down to her ruby slippers and a basket on her arm with a stuffed Toto and a flask of liquid courage.

They bumped into each other and wanted to talk but couldn't over the noise of the live band and several hundred costumed Oppies cutting loose. They headed outside where it was quieter.

They ended up in Morgan's truck which was neat and clean. Something shifted inside Mindy as they talked and talked. Mindy said, "I had heard that he liked me and he had even walked me home from school one day, offering to carry my books, when the grass was still green but the colors were changing and the smell in the air was musty with fallen leaves."

The ratio of boys to girls in the program was 4 to 1 so Mindy was smugly used to interest from boys plus she had a boyfriend back home, a good guy her family loved. "But this Montana boy was something new for me," joked Mindy. "He was smart and good looking. Clean cut, but definitely a mountain man, spending his summers smoke jumping for the forest service. I totally fell for him that night."

They had their first date a few weeks later at Nonna Emilia's in Beaverton, Ore. They shared a delicious calzone and talked all evening, telling stories about their lives and learning about each other. Morgan was the oldest of 4, growing up in Miles City, Mont. where his dad owned a veterinary practice. Mindy was the youngest of 2, growing up in Cheney, Wash. and her father was a psychology professor. Both of their moms had stayed home to raise their families. Mindy fell for him even more when he wasn't 'mister smooth,' driving the wrong way down a one way street, and she thought to herself, "He's The One."

There were bumps in the road they faced early on. Mindy had to break up with hometown boy and Morgan had to define his intentions with Mindy as he faced graduation and moving home to start working. They decided it was love and then made a two year long distance relationship work before cell phones, email and Skype. When Mindy got close to graduation, they worked out where they would live and practice. He proposed and she tearfully accepted.

Mindy said, "I recently read a piece written by a marriage skeptic about the impossibility of finding your soul mate for life. The author thought that one person is incapable of fulfilling all the qualities you need to sustain a relationship through the years. Wow. I feel bad for her because I found mine."

Morgan is Mindy's best friend and lover, her confidante and the father to their children. They have each others' back through life's ups and downs and they support and motivate each other to succeed, most recently both of them became ABO certified and him finishing his year of presidency for the Montana Optometric Association.

They will celebrate their 24th anniversary in June 2014 and Morgan is still The One, the love of Mindy's life.