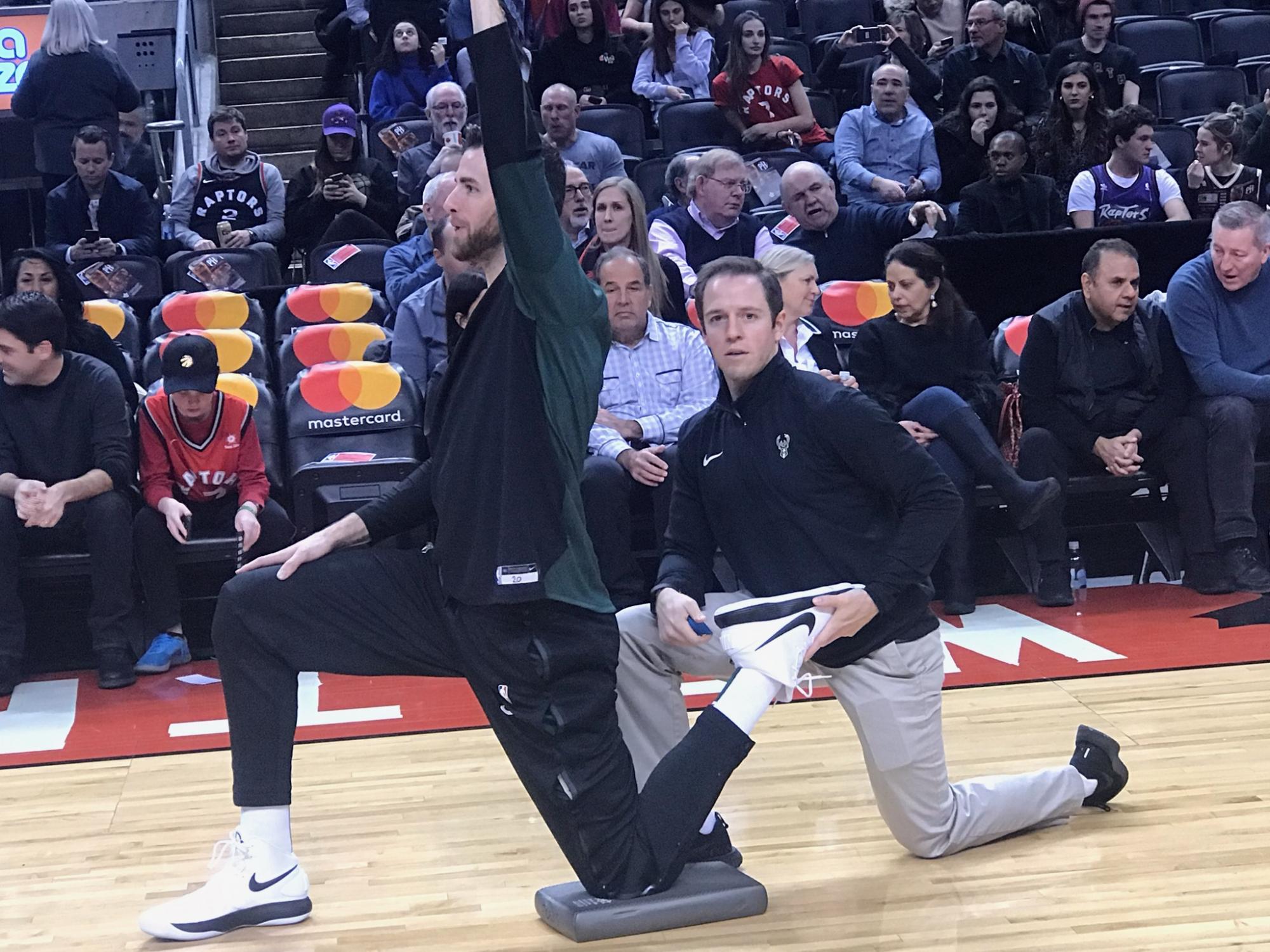 The Pacific University alumnus is part of an unusually sizable cadre of trainers, coaches and therapists employed by the Milwaukee Bucks professional basketball team. The group — all of whom work to help the team’s 15 players play at their peak performance — include three physical therapists, a strength and conditioning coach, a sports performance psychologist, a massage therapist, a nutritionist, three chefs and a sports performance director. The Bucks are, Bousquet said, “pioneering a new approach” to comprehensive athletic preparedness, thanks to the owners’ support.

For Bousquet, this is a heady place to be. When the team travels, he travels, too, frequenting National Basketball Association cities like Detroit, New York and Portland. His fiancée, Brianne Wolfe, a former Division I track star, still lives in Park City, Utah, where the couple had bought a house shortly before Bousquet was hired by the basketball team. Occasionally, they squeeze in trips to see one another.

“This is definitely my dream,” Bousquet said by phone from Cleveland, where the Bucks had flown after losing in Indianapolis the night before. “I absolutely love it.”

It’s his first year with the Bucks, and he’s hoping for more. Bousquet and his colleagues must deal with the tweaks and bruises that players incur in NBA games and practices. They have to assess if a nagging ankle problem, for example, is likely to worsen. Is the ankle too tight? Is it too loose? Will it support the athlete when he drives to the basket or soars for a rebound? Will the injury get worse if he plays?

He’s always aware when he works with a player “that’s a multimillion-dollar knee you’re working on, or a multimillion-dollar shoulder you’re touching,” he said. In the NBA, the average annual player salary exceeds $7 million and a star like Giannis Antetokounmpo, the Bucks’ 6-11 forward from Greece, earns more than three times as much.

Bousquet reached his place in the NBA by aggressively planning and relentlessly working at each stop beforehand, beginning at Pacific University, where he earned his undergraduate degree in exercise science in 2010 and his doctorate in physical therapy in 2013. His time in school prepared him well for passing the exam to become an accredited physical therapist, but he knew he wanted to do more — and he wasn’t bound by geography.

He was hired as a traveling physical therapist for a Miami-based healthcare system, then joined a Maryland hospital, then he got his most important break, winning a highly competitive, 14-month sports physical therapy residency in Vail, Colo. As a resident, he worked with world-class winter athletes, including members of the U.S. Ski & Snowboard Team.

That helped open the door to a new network of professional relationships, which he continued to nurture when his residency ended and he went to work as a sports physical therapist at Intermountain Medical in Park City. That’s where he was when the Bucks’ role opened.

“I got a text message from someone I had met while working with the ski team during my residency,” he said. “They had reached out to the U.S. ski team asking for recommendations and my name came up.”

It is the freshest and perhaps most rewarding example of the way Bousquet has driven his career to the next level. To students contemplating a physical therapy career, Bousquet says, “I would advocate pursuing something more. Keep pushing to further your education.”

Do your research. Pursue a residency. And always, he said, “keep asking questions.”