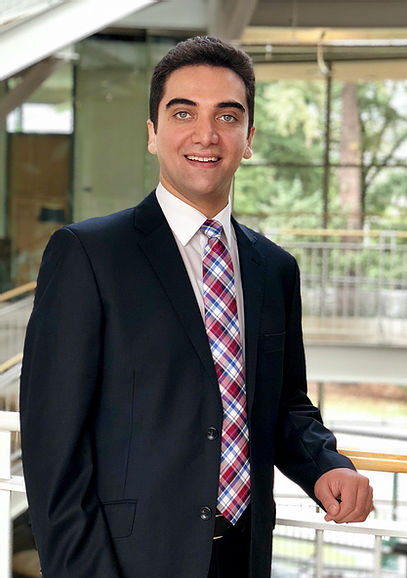 About the time Hossein Rikhtehgar Berenji was starting to work on his PhD, the worst disaster in the history of the garment industry occurred in Savar, a town near Dhaka, Bangladesh.

An eight-story building full of poorly paid garment workers, crammed together with their sewing machines, collapsed when the generators were turned on one fateful morning. When the building crumbled into the street, it injured 2,500 and killed more than 1,100.

The catastrophe brought international attention to the shameful conditions in some clothes-making sweatshops, especially those in Bangladesh. In the United States, Rikhtehgar Berenji was inspired to delve into the ways business contracts could be used to make industries like garment-making safer and more sustainable.

“That was my motivation,” he said. “How a brand like Apple or Nike can help their suppliers to reduce the chance of such violations.”

Rikhtehgar Berenji, assistant professor of operations management in Pacific University’s College of Business, has devoted much of his research to this question. His work has been honored with the “Best Problem-Driven Analytical Research Paper” award from the Decision Sciences Institute, as well as other grants and awards.

A portion of his research over the past year also has been devoted to the study of COVID-19 vaccine development — a timely topic that examines the unprecedented race to create and deliver an effective treatment during a pandemic. He scrutinized the overlapping phases of development, the bottlenecks in testing, and consumer sentiment about the vaccines.

“I just work out the problems that affect the life of people or the planet,” he said. When a factory flushes toxins into rivers; when suppliers exploit child labor; when safety is at risk, Rikhtehgar Berenji said, he asks himself what business behaviors are in play.

His results may strike some as counter-intuitive. Consider the sustainability question: Making workplaces safer and cleaner adds cost to the supply chain. How can added expense be beneficial to buyers, such as, say, Apple, and also their manufacturing partners in China and elsewhere“It’s not very intuitive,” he acknowledges. “There’s a lot of moving parts behind the scenes … This is a win-win situation, to improve the social good and also improve profits.”

The bottom line is that well-informed consumers have become attentive to supply chains. If Nike is associated with child labor in Asia, for example, consumers will penalize the brand in the form of lost sales or even boycotts. That gives Nike an incentive to demand compliance to codes of conduct governing human and environmental practices.

By focusing on the way contracts between brands and suppliers are structured, Rikhtegar Berenji said, researchers can see the way sustainability initiatives are pushed upstream, to the manufacturing source.

Between the study of supply chains and vaccine development, Rikhteger Berenji has been buried in work over the last year. In the coming year, he said, he plans to not take on so many projects.

He came to Oregon from his native Iran when he was 27, to earn his PhD in operations and business analytics and a master’s degree in decision sciences at the University of Oregon.

“I love Oregon. I love hiking. In my first summer in Oregon back in 2014 … each weekend I visited one lake,” he said. He did it so often, even his advisor, who had been in Oregon for about 15 years, said he hadn’t seen that many lakes.

Now he sounds like an Oregonian who enjoys being at Pacific University, which has supported him with research grants.