Physics, the dictionary says, is “the branch of science concerned with the nature and properties of matter and energy.” It’s a fitting description for record-holding discus thrower Kevin Carr, who also is a former physics teacher.

Carr, now a professor of science education at Pacific University’s Woodburn location, still owns the fifth-longest record throw for the discus at the University of Oregon’s track program at 198 feet, 11 inches. He was an All-American athlete during his UO career, participated in the 1988 Olympic Trials, and eventually threw a career best of 201 feet, 4 inches, ranking ninth in the U.S. in 1997.

Now, however, he devotes his time to implementing what will be Pacific’s newest teacher preparation program, a bachelor of education in elementary education and language learning in Woodburn.

The program, he said, is designed to build a pathway for first-generation minority college students to attend community college and Pacific to earn bachelor’s degrees and become teachers.

Pacific will partner with Chemekata Community College in the transfer program, but student recruitment will actually start in middle schools, Carr said.

An AmeriCorps member will join the Woodburn site this fall to create a mentor program, “where community college education students will mentor middle school students who dream of becoming teachers,” he said.

Although about 40 percent of elementary and secondary students in Oregon are non-white, only 5 percent of Oregon’s teachers are, he said.

“A big missing piece is that they don’t generally have many teachers who understand their cultural story, that deep knowledge of how their lives work,” Carr said. “The only way around it is to have teachers who come from that story.”

A 15-year resident of Woodburn, Carr said the area is an ideal location for this new program that aims to work with cultural identity of the families living there. Census figures from 2010 put the Latino population in Woodburn at 59 percent, and it is also home to a sizable number Russian Orthodox Old Believers.

“Being in Woodburn, I always had the idea this would really be a great place to become a teacher, because of the multicultural nature of the community and the district and the way the school district has arranged itself around issues of language,” he said, adding that his children have been in dual language programs in the Woodburn schools since kindergarten.

Carr grew up in Colorado, was the state high school champion in discus throwing, then started college at Colorado State University. After his sophomore year, he transferred to the University of Oregon.  A physics major, he also tutored “a lot of athletes who were taking physics and needed help.

“That’s what kind of got me hooked on teaching ... finding a reward in explaining it to people and seeing people actually understanding it.”

Carr began his teaching career at Roseburg High School. He later taught physics at Portland Adventist Academy, before he and his wife Lisa moved to Moscow, Idaho, for graduate studies.

He earned a master’s in physics and a doctorate in science education, then taught physics at George Fox University for 10 years. He also was instrumental in developing George Fox’s master of arts in teaching program.

Carr came to Pacific in 2008 as a professor of science education and taught astronomy.

It seems he is not the first Carr to teach at Pacific. He recently discovered his great-uncle William Carr, who was executive secretary for the National Education Association for some 30 years, taught at Pacific in 1927. 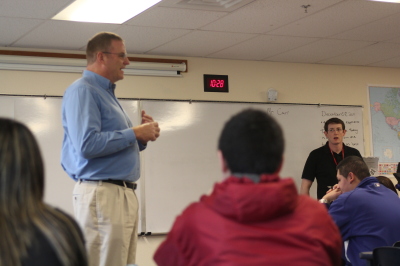