If it hadn’t been for a cross-cultural conversation between a young professional Russian volleyball player and a University of Alaska Fairbanks volleyball coach in 1992, Tatiana Piatanova might not now be at Pacific University.

Piatanova played on a professional volleyball team in the city of Khabarovsk, on Russia’s far eastern border — a seven-hour plane flight from Moscow — when she was in her late teens.

The daughter of a Russian air force father, she grew up as a “military brat,” in Russia and the former Czeckoslovakia, she said.

Around 1992, a volleyball team from the University of Alaska Fairbanks journeyed to Khabarovsk to play her team as part of the thawing in relations between the United States and the former Soviet Union.

“I was the youngest on my team and my coach told me to ‘say something to them.’ I didn’t speak a word of English,” she said. “‘What do I say?’ My coach told me to say ‘My name is Tatiana, and I want to come to America.’

“I had no idea of what I was saying. I shook a hand and didn’t think anything of it,” she said. “A month later, I got a letter from them inviting me to come study with them at UAF and play on the team.”

Thus began Piatanova’s education in the United States. She played volleyball for two years on a full scholarship at the UAF, then spent two years completely on her own.

“I wanted to go back to Russia, but I had no money,” she said. “It wasn’t even a choice, because financially, I couldn’t. So, I stuck around, got some student jobs and under-the-table jobs, paid my way through school. And then, my third year there, I fell in love, got married and all that stuff.”

The Russian teenager, who originally spoke no English, earned a bachelor’s degree in English in 1998, then a bachelor of fine arts degree in painting and computer art in 2000 from UAF.

After graduating, she found a job at Alaska Sea Grant, part of the National Oceanic and Atmospheric Administration. Working with scientists, Piatanova designed books, did scientific illustrations and got to travel all over Alaska.

After few years of doing graphic design, she decided to continue her education in art at Parson School of Design in New York City. The move lasted two years.

“I didn’t finish because I missed Alaska,” she said. “I found myself going back every chance I got … so I just moved back.”

She worked for a nonprofit art association, then for her alma mater in the field of instructional design.

In her new position as instructional designer at the Center of Educational Technology and Curricular Innovation, housed in the Library, Piatanova helps faculty and students with technology now available for education.

Her roles including working to implement technology in the classroom, helping train students and staff to use the technology, and making suggestions as to what technology to use for different needs.

In the flipped model, students watch lectures on their own time. In class, they have discussions and do problem-solving, “they actually do what they would normally do in homework,” she said.

“That model has been found to be really successful for a number of reasons, not the least of which is the instructors’ presence and guidance in the classroom when the students experience problems does lead to a deeper understanding of concepts,” she said.

Piatanova also is a professional artist, a reader, a knitter and a hiker who loves the outdoors and looks forward to exploring Oregon’s trails. 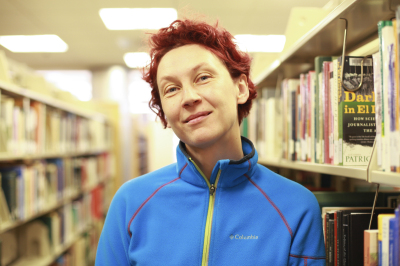