As a teenager, Chris Stamm MAT ’22 dropped out of high school in the San Francisco Bay area and describes his road to college as a rocky one.

He eventually earned a degree from UC Santa Cruz and worked in the film industry, but quickly gave that up, and moved onto freelance journalism.

Stamm bounced around the West Coast from Los Angles to Seattle before settling in Portland, where he is a writer for Willamette Week.

And now, 15 years later, he is pursuing a master of arts in teaching in special education. 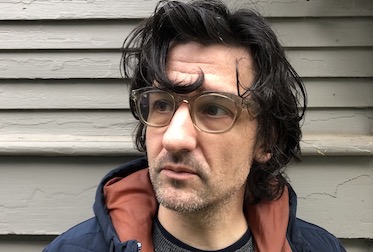 “I want to be a teacher because I want to do work that matters,” said Stamm. “I want to try as hard as I can to upend and subvert systems of oppression that have hurt far too many people and far too many communities.”

Stamm shared those thoughts with Pacific University when he first entered the College of Education program. Now in his final year of studies, he says he has a little less bravado.

“It’s probably a lot harder to do that than I thought at first, working within a pretty entrenched system that’s rife with benchmarks and standards,” he said.

“Upending the system also means doing work with other teachers who care, and helping a family get the services they need from a system that might have historically ignored them.”

The school-to-prison pipeline, Stamm’s struggles in high school, and his experience as an educational assistant at an alternative high school with the David Douglas School District led him to pursue a teaching degree.

“Students with disabilities have more contact with law enforcement and tend to be disciplined more than they should,” he said.

“Working as an EA and being with those teenagers felt right somehow, and as someone who had a really hard time in the public school system, there was a little bit of self-healing going on there too. As an anti-capitalist I’m interested in dismantling the system, but also it’s more emotional than that and more personal, that it just felt right.”

Stamm advises future students to enter school with an open heart and be prepared to work at making connections with their peers.

Pacific’s social justice mission and evidence-informed pedagogy drew him to the university, but what really sold him on the teaching program was Assistant Professor Bryan Cichy-Parker.

“He said this cohort would become like my family for a bit and that’s what it’s been like actually,” Stamm said.

“I’m a little bit grumpy and a bit of a loner and I wasn’t expecting to bond with people emotionally or intellectually, but I have, and that was something that Dr. Cichy-Parker had promised. I was dubious to say the least, but it actually happened.”

He hopes to teach at a school in the same school district that his 7-year-old daughter attends. Stamm believes people in service jobs like teachers and police officers should live in the communities they serve.

The master of arts in teaching in special education program is a 24-month online hybrid program developed in collaboration with partner school districts. Pacific’s NCATE-accredited program is dedicated to preparing all teachers to support students with disabilities as equal and valuable members of the school community.