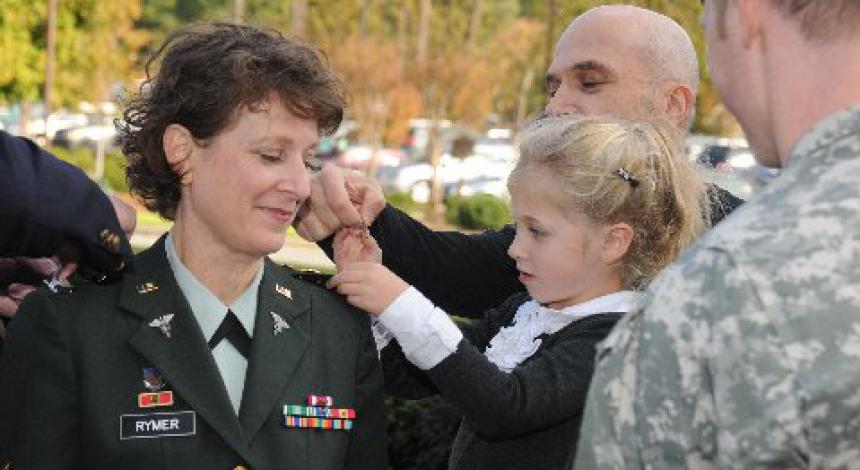 In the 20 years since graduating from the Pacific University College of Optometry, Col. Carol Z. Rymer O.D. ‘92 has found her career in the U.S. Army both rewarding and full of opportunity.

She’s also made history: In 2010, she became the first woman optometrist to earn the rank of "full bird" colonel in the U.S. Army.

“I feel really lucky and honored by the recognition,” she said in a phone interview. “It is a humbling experience.”

Rymer joined the military after her first year of optometry school at Pacific, when military scholarships, which had been discontinued for optometry students some years before, suddenly became available at the end of 1988.

The reactivated scholarships not only provided funds for tuition, but also stipends for living expense, books and other necessary school expenses.

“It was a fast and furious process,” said Rymer, who had only a month’s notice to get all the paperwork in, be boarded and make the decision to accept her commission as an Army officer.

Rymer succeeded in obtaining the scholarship, earning funds for her three remaining years of optometry school, with the caveat that she spend three years on active duty.

“It was a fantastic opportunity and program,” lifting the burden of debt and providing a job after graduation, she said.

A big advantage of the Army scholarship program, she added, was being on active duty six weeks each year while in school, which allowed her to look at different kinds of optometric practices.

“I thoroughly enjoy hospital-based optometry,” she said. “You don’t have to worry about a variety of things. It’s easy to get to take care of patients with the best equipment and technology available. You don’t have to worry about how the patient is going to pay for the healthcare visits. It’s also multidisciplinary and has been a very rewarding and enriching type of optometry.”

In her 20 years of Army optometry, Rymer has traveled all over the country and overseas. Her stints of duty have included posts in Colorado, Texas, Pennsylvania, Oklahoma, Hawaii, Korea and and North Carolina.

She currently is based in San Antonio, Texas, as the Southern Regional Medical Optometric Consultant and the Chief of Optometry Services at Brooke Army Medical Center.

“I really enjoy this kind of professional medical setting, the traveling every three years, the challenges, being immersed in the various cultures all over,” she said.

She said she’s never felt that being a female in the military has posed any obstacles.

“I have been fortunate to have developed strong leader skills through great mentors—that might have been part of my success," she said. "I never felt my gender was an obstacle. When they threw opportunities my way, I took them on and I was able to have a very diverse career pathway that built upon itself.”

One opportunity, for example, was as chief of optometry services at Fort Bragg, N.C., where she oversaw one of the largest primary care centers in the Army. Fort Bragg is the Army’s largest, she said, with the most soldiers and the most optometrists at one location, spread over five geographical separate clinical sites.  As the officer in charge at Clark Health Clinic, she was responsible for the day-to-day clinical management of a busy primary care setting at Fort Bragg caring for over 35,000 patients and supervising 250 employees, she said.

Additionally, during her tour at Fort Bragg, she was able move the optometry section from a service to a department-level organization, a first for the entire Department of the Army, allowing more independent leadership and direct reporting to the executive command.

Rymer is married to Scott Rymer, and the couple has a 9-year-old daughter, Quinny.

When she retires from the military, Rymer said she’s interested in teaching.

“My interests have been very academic,” she said. “I’ve been a residency program director for Army residency programs…and I really love the teaching aspect.” Rymer also lectured this past summer at Pacific’s annual continuing education conference in Victoria, B.C.