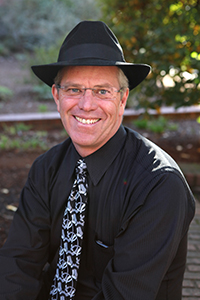 Pacific University College of Optometry Professor Kenneth Eakland is the first-ever recipient of the Bleything Fund for Faculty Development award for faculty scholarship. Bestowed on Dr. Eakland this spring by the College of Optometry’s Research & Awards Committee, the award will fund Dr. Eakland’s research on how genetics and genomics influence the understanding, diagnosis, and treatment of diseases.

The Bleything Fund award will support Dr. Eakland’s attendance at one of the largest Genomic World conferences to continue his ongoing development of expertise in the areas of genetics and genomics and how they have an impact on healthcare. Dr. Eakland believes that the fields of genetics and genomics will transform how disease is understood, diagnosed, treated, and potentially eliminated. Attending the Genomic World conference will help him gain insight into what is happening in these fields currently, and also understand what is coming in the near future.

“In all areas of transformative change, the excitement of what ‘could be’ needs to be considered and tempered against ‘what could happen,” Dr. Eakland said. “The transformational improvements to the human condition potentially inherent to this research must be balanced against the potential risks equally inherent in this science.

“I hope to bring both perspectives to my courses to start the discussion with the future doctors here at Pacific. They represent the future of our profession and must have a voice, based on understanding, to shape the future. I believe that our students can do this by help[ing] direct the path that healthcare, and our society in general, takes as the discussions between our scientists, showing what is possible, and the leaders of our society considering what should be. These difficult discussions must occur in our society now as we rush forward to the future.”

Dr. Eakland was instrumental in the development and teaching of the Advanced Ocular Therapeutics course, as well as the Injectibles Workshops for the Oregon Optometric Physician Association. He currently teaches in the Medical Pharmacology track and the Biomedical Ethics track, in addition to public health and genetics/genomics courses. Dr. Eakland is most well-known for his passion for technology, especially when it relates to healthcare and optometry. He is referred to as the “resident futurist” of the college in terms of what technology will do to transform healthcare and optometry — a topic on which he lectures nationally. He has taught in every department in the College of Optometry and has held nearly every positon in the college, including multiple director positions, associate dean for clinical programs and interim dean of the college.

He earned his bachelor of science from Carroll College in 1980 before coming to Pacific for his doctor of optometry, which he earned in 1984. He actually began his teaching career at Pacific in 1980, teaching labs for a course he was concurrently taking. He joined the faculty of Pacific’s College of Optometry in 1984. From 1984 to 1996, Dr. Eakland worked both as a faculty member and in his own private practice. In 1996, he joined Pacific’s faculty full time.

The Bleything Fund for Faculty Development was established by Dr. Willard “Wid” ‘51, OD ‘52, MS ‘54 and Mrs. Karen Bleything to fund faculty development initiatives for the College of Optometry. Through the contributions of the Bleythings and other generous donors, the fund has grown in size enough to now provide an award each year, starting in 2017, to advance faculty scholarship and professional development activities for College of Optometry faculty. Activities supported by this funding include research presentations at national and international scientific meetings, participation in multi-center clinical trials, attendance  at national and international meetings, and  participation in seminars and workshops on research methods and design, as well as the development or scholarship of teaching and learning.

Dr. Bleything attended Pacific as an undergraduate and graduate student, receiving his bachelor of science in 1951, his doctor of optometry in 1952, and his master of science in 1954. He became a clinical assistant in the College of Optometry in 1952 and was promoted to assistant professor of optometry later in the year. Dr. Bleything returned to Pacific several times over the course of his career, which included several years with the U.S. Air Force as a faculty member at the School of Aviation Medicine and many years in private practice. From 1975 to 1991, Dr. Bleything was the dean of the School of Optometry, and in 1991 he became Pacific’s director of international programs and director of graduate education. From 1998 to 1999 he served as interim vice president for academic affairs. Dr. Bleything retired from Pacific in 2003 as a professor emeritus. In 2015 he received the Kamelia Massih Prize for a Distinguished Optometrist, which recognizes an alumnus who has made a significant impact on the optometric profession.