College of Optometry Cares for Babies Through InfantSEE 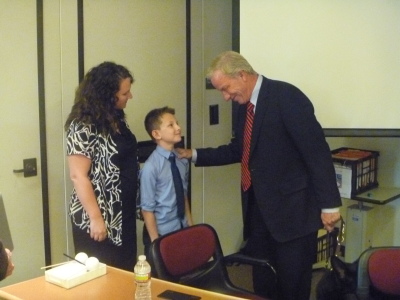 All babies between six and 12 months of age should undergo a comprehensive eye exam to detect and correct abnormalities that cause serious health problems, including blindness.

That's the message from a panel of experts, including blind actor, singer and author Tom Sullivan, who convened at Pacific University's College of Optometry on Nov. 11 to advocate InfantSEE, a national initiative of the American Optometric Association that provides comprehensive eye exams to babies free of charge.

All five of Pacific University's EyeClinic locations throughout the Portland metropolitan area offer the free exams, as do hundreds of other optometrists throughout the country.

With so many things parents must do to protect their baby's health, an eye exam might not immediately come to mind. But it should, said Dr. Glen Steele, professor of pediatric optometry at Southern College of Optometry in Memphis who offers the free exams as an InfantSEE participant.

Steele reported findings from an InfantSEE program study supported by the Center for Disease Control. One of every six infants showed risk factors for ailments that can be as serious as glaucoma. The number jumps to one in four for ethnic minority populations and those born prematurely.

Steele shared some of his patients' stories, including those who benefited from exams as infants and others who were not checked out. Complications in those not examined could have been reduced or negated altogether had they been seen by an optometrist. He reviewed the case of "Gracie," who had cancer of the eye and whose mother told him the InfantSEE program saved her child's life.

"When we see these babies earlier in life and can intervene, we know their chances for success increase dramatically," Steele said. "It really is about changing lives."

Steele noted that exams provided by participating InfantSEE optometrists are comprehensive and go beyond most screenings that pediatricians give when examining children as toddlers. Often by then, he added, vision problems have progressed to the point that patients require more invasive therapy if they can even be corrected at all.

And complications from undiagnosed vision problems are not limited to physical development. Mark Bailey, a professor within Pacific's College of Education and an expert in early childhood learning and development, told the audience the link between vision impairment and cognitive difficulties is strong.

He outlined how a baby's vision and sensory system develops during the first 18 months and how it impacts the baby's initial life experiences, and subsequently, its brain development, motor skills, ability to learn and social interaction.

"Vision is a critical key to overall child development," Bailey said. "Early childhood is that sensitive period when critical learning experiences provide the foundation for further learning and further development."

Dr. J.P. Lowery, chief of pediatric services for Pacific's College of Optometry, used a video to show how exams are performed on babies in a non-invasive manner. They sit on their parents' laps and do not look through vision measuring equipment the way adults must during exams.

"We can get the same information objectively with a series of tests so that by the time we're done, we know exactly what the baby sees or at least have a pretty clear idea whether or not their vision is normal. Don't wait until your baby is two or three years old."

Maya White, a resident of Beaverton and mother of five, shared how a second opinion she obtained from Dr. Lowery allowed her son Kyler to avoid surgery in favor of vision therapy that over time corrected a severely turned eye and allowed him to develop depth perception.

Lowery noted that had Kyler's extreme farsightedness been found when he was a baby, his eye turn, consequent vision problems and years of therapy could have been prevented. The national InfantSEE initiative began two years after Kyler was born.

"I can't say it loud enough to the parents with new bouncing babies of their own," Maya White said. "Take your infants to get a complete eye exam to give them the best start possible."

Sullivan, the featured speaker and the self-proclaimed 'token blind person' at the event, praised both Maya and Kyler White for their courage to persevere and willingness to share their story.

Born prematurely, Sullivan lost his sight as an infant, but went on graduate at the top of his class at Harvard University, become world champion amateur wrestler and award-winning author, singer, comedian and actor. He reflected on how his mother told him she suspected something was wrong with his eyes, but his father dismissed it.

He praised Maya White for being persistent in seeking out comprehensive care for Kyler. "Maya teaches us that to be proud of something means to be consistent," Sullivan said.

Since InfantSEE launched in 2005, more 100,000 babies have been examined. That leaves many more each year who should be screened. "Now is the time to raise public awareness," Steele said. "It's for every baby, not just those whose parents think they might have problems."

Oregon Gov. John Kitzhaber recently proclaimed Nov. 2013 to be InfantSEE Month in support of the initiative as the best way to treat and prevent permanent vision impairment.

InfantSEE's start is due in large part to the efforts of the late Pat Cummings OD, a 1977 Pacific University Optometry alumnus who supported the initiative's development while serving as AOA president.