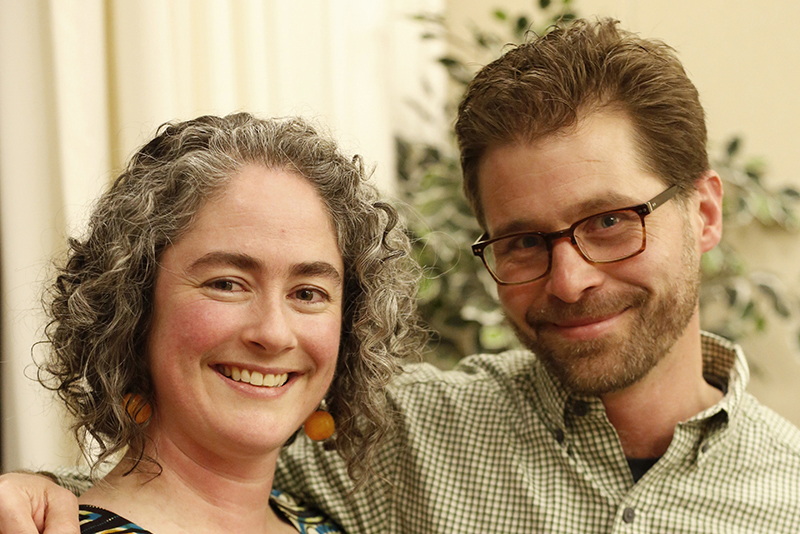 Brett Meyer ’96 and Melissa Barber ’97 had successful careers in financial management and a comfortable life in Portland. Then, the married couple decided to auction off all their belongings, join the Peace Corps and travel 6,700 miles to Mali — a decision that monumentally changed the course of their lives.

In Africa, the couple worked on a radio program, coached a girls’ soccer team, and worked in small enterprise engineering and health education.

The couple had always thought about joining the Peace Corps but never got around to it, Barber said last week, as the couple shared their story with Pacific University students as part of a panel of Peace Corps alumni.

When she got laid off from her job, it was the perfect opportunity to sit down and think about what they wanted to be doing with their lives.

“Working in the financial industry, it gets to a point when you are just doing it for the money and not really accomplishing anything for anyone,” Meyer said. “It was a life change that we needed.”

After a year-long application process, the pair was sent for a three-month training session to prepare them for the conditions they were about to experience for two years. For Brett, though, the reality of life in Mali didn’t fully resonate until his first trip on public transportation, when he saw a man being peed on by a sheep. Meyer laughs at the memory, just thankful it wasn’t him.

Their eyes were opened to the sheer size and diversity of the country, the harsh conditions people live in, and the complexity of international development.

“I challenge anyone to go somewhere where it’s 114 degrees five months a year and try to get something done,” Barber said.

Meyer added that they were surprised by how much international relations became part of the job. While people were warm and welcoming, their expectations of Americans were warped by television and movies, he said.

Barber laughed as she explained that she and her husband were often asked if they were CIA agents.

Meanwhile, Hurricane Katrina hit the United States while the couple was abroad, and Meyer remembers how shocked the people of Mali were that a natural disaster of that caliber could even hit the U.S., much less not be solved quickly.

MEYER AND BARBER WEREN’T THE TYPICAL PEACE CORPS VOLUNTEERS. Being married and being seven years out of college set them apart from the typically younger volunteer base. Their status was a challenge in learning the language and connecting with some of the other volunteers, but it also gave them great support and motivation during their period of service.

“It really helped to be a married couple because we both hit the depressed, missing-home stage at different times,” Barber said. “When one of us was down, the other could say, ‘But I love my work!’”

While the experience is among the most amazing of the couple’s lives, it didn’t come easy. On top of the heat, less-than-desirable-food, and communication struggles, both Meyer and Barber contracted malaria.

It was the only time in his life when Meyer said he felt like it would be better to die.

Still, they spoke highly of the lifelong friendships they made with the people of Mali and with their fellow volunteers.

Barber recalled her last day in Mali, having dinner with a woman she had worked closely with. When she reached out with her left hand — a tradition reserved for long goodbyes — the woman burst into tears, because she was not ready to say goodbye. At that moment, Barber said, they realized they would likely never see each other again.

“She was my champion,” Barber said. “It was very sad.”

MEYER AND BARBER HAVE BEEN UNABLE TO RETURN TO MALI, due to uprisings and the difficulty of travel in the region, but they stay in close contact with friends online.

“Google Translator is awesome” Barber chuckled. “I just copy and paste what I’m trying to say and it works out great!”

Coming home, though, has been a transition. Barber said she was surprised at how hard it was to adjust and find jobs when they tried to reinvent their careers.

“Being in the Peace Corps really made me think I should be doing something to help someone else in the world,” Meyer said. “I didn’t necessarily have that before.”

Today, both have left their careers in financial management for work in the nonprofit sector. Barber works with the Death with Dignity National Center, while Meyer works for a consulting firm that deals only with nonprofit clients. He said he loves his work because he is able to amplify his knowledge and reach more people than he could by himself.

“We are not just making money now,” he said. “It makes me incredibly proud of where I work.”

Beyond strong connections to the people in Mali and to fellow Peace Corps volunteers, their time of service renewed Meyer and Barber’s confidence in their abilities and their sense of self.

Meyer explained that he has more vivid memories of his time in Mali than he does of his entire life prior to it, and that sometimes just making it through the day was a huge accomplishment.

“If you can make it through two years in Africa,” Barber echoed, “you can do anything!”