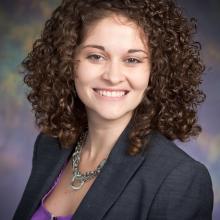 Pacific University Assistant Professor of English Elizabeth E. Tavares has received a National Endowment for the Humanities Summer Stipend of $6,000 to complete a book manuscript on the early Renaissance theater history.

The award will allow Tavares to complete the manuscript for her first book, “The Repertory System before Shakespeare: Playing the Stock Market,” a study of four 16th-century British theater companies and their contributions to the history of theater, performance, and the early modern English economy.

In it, Tavares will assert that dramaturgical features — such as blocking, cosmetics, sound, and props — were the primary means by which early playing companies distinguished themselves from one another in order to survive in the diverse, competitive theater marketplace of the English Renaissance.

Tavares’ project was among just 82 selected from approximately 745 applications nationwide — less than 11 percent. NEH grant programs enable individuals and institutions across the U.S. to study, preserve, and share American and world history and culture.

“As a school with close ties to the oldest Shakespeare repertory company in the United States, the Oregon Shakespeare Festival, I am overjoyed that this will be a Pacific University and an Oregon-based book,” Tavares said.

Tavares is also one of just 15 scholars to receive a Folger Shakespeare Library fellowship of $3,900 to participate in a month-long paleography workshop this June in Washington, D.C. Early English paleography is the study of pre-print handwriting, the ancestor of today’s cursive. Before the rise of the printing press and the affordability of printed books in the late sixteenth century, all municipal and financial records were kept in England using what scholars call “secretary” hand.

"Learning how to accurately read and transcribe secretary hand is a discrete, specialized rare book skill you can really only acquire in the United States through a Mellon workshop, typically held once every four years at the Huntington or Folger libraries," Tavares said. "I am particularly grateful to be accepted in the last workshop to be offered before the Folger Library closes down for two years of renovations."

The honors are just the latest for Tavares since she joined Pacific’s faculty in 2016. Last year, she received a Huntington Fellowship that led to the completion of research on how early modern playwrights represented the peoples of Mongo-China in early English stages.

Tavares has also been a scholar-in-residence at the prestigious Oregon Shakespeare Festival in Ashland, and has been instrumental in bringing the Oregon Shakespeare Practice Festival to Pacific, with two performances of the organization's current show, Henry V, taking place on the Forest Grove Campus Saturday, March 30 and Sunday, April 7.

As an avid teacher and mentor, Tavares has developed courses in and lectured on British literature and history, EcoDrama, contemporary Shakespeare adaptations and performance, Critical Race Theory and hashtag activism. Her mentees have pursued thesis projects bridging the discourses of dance, embodiment, and the Victorian novel; exploring the affective affordances of Sherlock Holmes fan fiction; and tracing the history of editing grief in early modern representations of male mourning.