Ecuadorian Alumnus Reaches Out After Earthquake 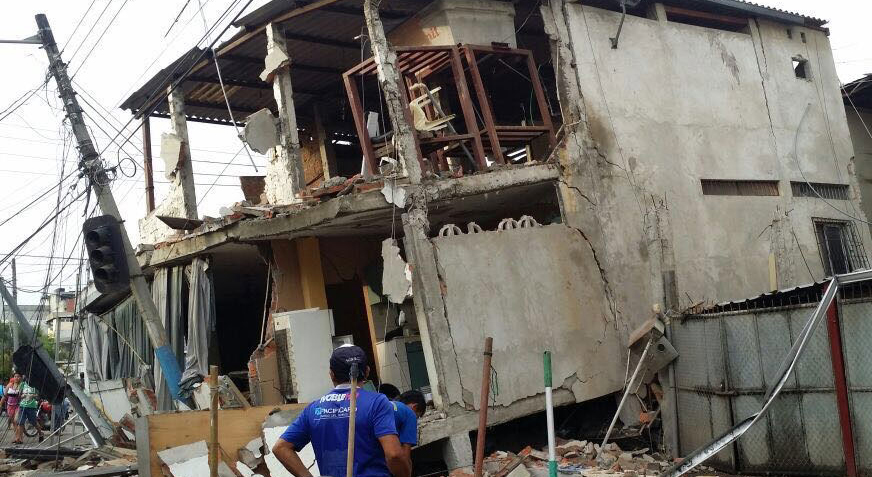 Small tremors are a regular part of life in Ecuador, but the 7.8 earthquake that hit on April 16 was a shock for Xavier Muñoz ’00.

“It lasted almost 60 seconds, which is not at all common,” wrote the Ecuador native. “My wife and I tried to stay calm, but it was difficult.”

Muñoz and his wife Maria Eugenia are currently living in Quito, the capital, while awaiting their next assignment with the Ministry of Foreign Affairs. Quito is in the mountains, about 260 miles from the quake’s epicenter on the coast.

“We managed to talk to our parents and siblings, who live in coastal cities, and were relieved to know they were fine. We also spoke to friends who live in Manta, one of the most devastated cities, to learn that many of their homes had severe damages, and that a big part of the city was destroyed,” Muñoz said. “Many lives, including a friend of mine, as well as houses, buildings, and businesses, were lost.”

Muñoz grew up in Ecuador, but his grandfather offered him the chance to attend college in the United States. He choice Pacific University for its English Language Institute and the chance to immerse himself in English-speaking American culture. At the same time, he completed his bachelor’s degree in economics and mathematics.

Today, Muñoz and his wife are both first secretaries with the Ecuador Ministry of Foreign Affairs, meaning they often live abroad to support diplomatic relationships and Ecuador nationals who may be traveling or living out of the country.

They most recently spent five years in Lima, Peru, where he was stationed at the consulate and she was at the embassy. They are expecting their first child in June and their next diplomatic mission next year.

In the meantime, Muñoz is reaching out to his network of friends around the world, seeking support for Ecuador.

“Roads, hospitals, electricity and water treatment facilities were severely damaged. In the meantime, the people of Ecuador have made an amazing effort by volunteering to help in the devastated areas, by gathering and donating food, water and clothing. It is something that has brought the country together,” he said.

“My country will still need the support of its own people and of the international community for the demolition and reconstruction stages, which will demand resources and technical assistance.”

Muñoz reached out to the Pacific University community on Facebook shortly after the quake.

“I have no doubt, from the experiences lived in my college years, that the generosity and willingness of its members, even if it is only through prayers and support messages, will contribute to increasing hope and strength to overcome these difficult times,” he said.

The United Nations Office for the Coordination of Humanitarian Affairs on May 6 reported the death toll of the quake at 660, with seven people still missing. Nearly 7,000 buildings were destroyed, and 560 schools were affected, with 166 suffering medium to severe damage. Health assistance has been provided to more than half a million people, and nearly 23,000 are still in shelters.

Donor response to the crisis has been poor, though, the UN said. There are several reputable nongovernmental organizations taking donations for relief efforts, ranging from water purification and hygiene kits to food and building equipment.