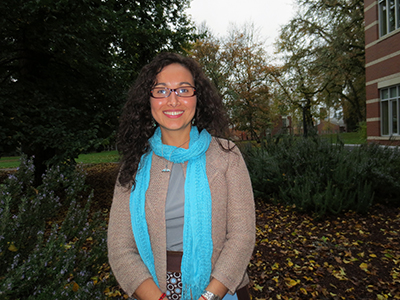 In the state of Oregon, where the Hispanic population surged 63 percent from 2000 to 2010, Pacific University is pursuing education for professional students with an understanding of Hispanic culture.

One of those target growth areas is the Latino/bilingual track within the School of Professional Psychology, with its new director, Ruth Zuniga.

Born in rural Costa Rica, Zuniga’s background mirrors the journey taken by many other Latino immigrants to the United States.

She was the youngest of four children. Her two older sisters began working after sixth grade, she said, because the family needed the money the girls could earn

“My brother, because he was a man and due to cultural values, was allowed to attend high school, but the women in the family could not,” she said.

“Education is free, but when someone is attending school, it means they’re not working, they’re not bringing money to the family, and it means you have to pay for all the other things. You need uniforms, books, food, and everything else.”

But Zuniga loved school and did well in her studies, and she was determined to follow in her brother’s footsteps. She battled the cultural stereotypes and, with her sisters’ support, attended high school, despite her mother’s desire to keep her home and her father’s prolonged absence.

One of her sisters died of leukemia while she was in school, leaving two small children — one 5 months and the other 1 ½ years old. At night and on weekend, Zuniga was in charge of taking care of the children. But she kept studying.

“I loved being in school,” she said. “I became involved in every single thing I could: oratories, student government, math competitions.”

When some of her family doubted if she should continue, her teachers would travel to her hometown to stress to her mother the importance of Zuniga’s education.

After high school, she found work helping to manage a hotel, and there met some Americans who worked at a power plant construction site near her hometown. She became a “cultural broker” for them, helping them to understand and negotiate possible cultural conflicts.

She also started studying psychology nights and weekends, earning a bachelor’s degree from the Universidad Latina de Costa Rica in 2003.

At work, meanwhile, she met her future husband, Andy Soria. Also originally from Costa Rica, Soria had earned both his bachelor’s and master’s degrees in the United States and was working at the power plant as an environmental engineer. They married and moved to the University of Idaho at Moscow.

There, Zuniga struggled with the cultural shock of being a new immigrant in the United States.

“I felt lonely, sad, far away from home, different, but wanting to make the most out of the situation,” she said.

To learn English, she would throw a blanket over the TV and listen only to the words. She also persuaded a professor to let her sit in the classroom, though she didn’t speak English well enough to register for classes, and she bartered with a woman to help her prepare to pass the TOEFL (Test of English as Foreign Language) test, making her a Costa Rican lunch once a week in exchange.

Finally, Zuniga learned enough English to pass the TOEFL and got a position as a graduate residence assistant in the Residence Life Department at the university.

“I had never been in a dorm in my life,” she said. But, she told the housing directors, she had hotel management experience in Costa Rica: “You have rooms. I have been a hotel manager dealing with rooms. You have beds. I know about beds. I’m a hard worker.”

She earned a master’s degree in counseling and human service from the University of Idaho in 2006, then she and her husband moved to Alaska, where she earned a doctorate in clinical-community psychology with a rural and indigenous emphasis.

She was surprised by how many Latinos she found living in Alaska and how much need there was for Spanish-speaking providers.

“I was the only Spanish-speaking therapist in the state,” she said. “I saw the need not only for serving Latinos but for training students and people to treat Latinos in a culturally appropriate way.”

That, she said, is just what she can do at Pacific. The Latino/bilingual track in Pacific’s School of Professional Psychology focuses on doctoral students interested in learning, serving and delivering mental health services to the Latino community in Oregon and beyond.

“We have to focus on serving and working with the Latino community, in all the different environments, contexts and areas — from the immigrant worker who may have no papers to Latino leaders, Latino advocates and Latino professionals,” she said.

“… I want us to bring the service to the people, to seek opportunities beyond the therapy room. With the new trends in the population and healthcare, we need to work in more integrated and more interdisciplinary fields.

“I want the track to be more about community relationships … about empowering the community.”