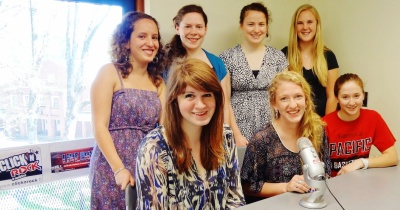 Pacific University's French Department has been honored by the Centre de la francophone des Amériques (Center of Francophonie of the Americas) for its franciphone (French-speaking) radio program "Live from USA."

The program was one of just 40 from throughout North America to be selected for broadcast in Canada as part of the center's Radio Jeunesse des Amériques (Youth Radio of the Americas) initiative.

Radio Jeunesse des Amériques showcased the diversity of expression from young people May 21-27 as a lead-up to the Forum of Canadian Francophonie, a week-long government forum for French speakers being held in Quebec City.

The initiative broadcasted 40 programs aimed at youth audiences ranging in ages from 4 to 18 on its FM station in Quebec, AM station in Ottawa and on the Web.

"The initiative is intended to encourage francophone students who live on territories of the Americas to express themselves," said Jessica Lebbe, French language teaching assistant at Pacific and the students' Live USA production.

Each year, the Department of World Languages and Literatures invites five young people who are native-speakers of the languages the University teaches to come to Pacific and assist with language instruction and activities each year.

Lebbe was this year’s assistant for French Studies. Her background in radio spearheaded a broadcast project in French classes that resulted in the students broadcasting in French on French radio station Click'N'Rock and its website.

Live from USA's last show in France aired May 16 with subjects ranging from American pop-rock latest talents to on-campus sports.

Additional information on Live from USA can be found on Facebook.