'It Leads You to New Things' 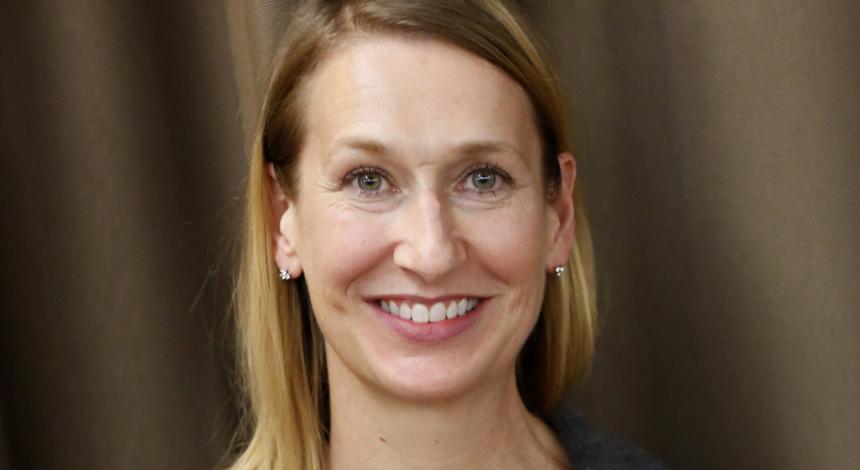 There’s quite a difference between working in the aftermath of the genocide in Rwanda and singing bubble-gummy ye-ye music on state in San Francisco.

But for Carol Pott ’86, both are life experiences instigated by a liberal arts education at Pacific University.

Pott, who returned to Forest Grove in October to speak to current students and show her college-touring son her alma mater, has used the skills she learned at Pacific to work in publishing and communications, to develop a training program for human rights monitors in Africa, and to work for UNICEF and the United Nations.

“Growing up, I was told I needed a skill,” she said, recalling how she was steered away from writing for more tangible careers, like law.

The liberal arts, though, gave her the skills she really needed, she said.

“I took what I wanted to be and was able to live a life of passion,” she said.

POTT FIRST CAME TO PACIFIC UNIVERSITY for the location, the size and the personal connections. She was touring Pacific Northwest colleges on her father’s advice, and she knew she wanted something with small classes after high school experiences both at a huge school in Davis, Calif., and a smaller school in England.

She started out in a now-defunct partnership program that allowed undergraduates to study clinical psychology in partnership with another university, but her interests changed her freshman year after taking classes from English Professor Mike Steele.

“He doesn’t know this, but he completely turned my head. He took me aside one evening after class and said, ‘You’re a good writer, you should really focus on this,” she said. “I ended up a communications major and an English minor.”

After graduation, she went into publishing with magazines in San Francisco then Seattle, working mostly in graphic design and as a production coordinator. Later, she moved to Washington, D.C., where she again did graphic design and publication design, now for an economics and policy institute. When her husband took a job in Rwanda in 1993, she went, too, and ended up doing an economic survey for the U.S. embassy there and volunteering at a human rights organization.

And using the French she studied for two years at Pacific University — though she needed a refresher.

“The ladies in the market wouldn’t sell to me, because my pronunciation was so bad,” she recalled, laughing. “I had to learn.”

In April 1994, the Rwanda genocide broke out. Over the course of 100 days, somewhere between 500,000 and 1 million people were killed. Pott and her husband were evacuated. He lost his job, she lost the international school teaching position she had started two weeks earlier. They had to leave behind their home, their dogs, friends whose fates were a mystery.

“I was obsessed with getting back,” Pott said.

For a few months, the couple tried to decide what to do next, all the while wondering what they had left behind and reading stories in the international media, many of which didn’t tell the full story as she understood it. Then, she read about peacekeeping units and human rights monitors — many directly out of college with no experience — being sent in to stop the violence.

“A lot were coming in and treating Rwanda like a natural disaster, which was what they were used to responding to,” she said. “The idea that people would come in and, in some cases angrily, deal with people who had been subjected to such violence — it was hard to handle.”

She began asking questions and writing, interviewing every expert she could find and developing a training program that would help the human rights monitors better understand and deal with the unique situation.

Ultimately, it was adopted, and Pott was in Geneva, then back in Rwanda, conducting trainings.

In her spare time, she was looking for long-lost friends. Some, like the man who gave her French lessons, took years to find. Some were never found.

FOR SEVERAL YEARS, POTT WORKED FOR THE UNITED NATIONS High Commission on Human Rights. She was stationed in Rwanda, Uganda and Tanzania and conducted assessments in Somalia and Kenya. In 1997, she was scheduled to go to Bosnia, when she found out she was pregnant and decided to look for work in safer climes.

She transferred to UNICEF and moved to the Kingdom of Swaziland.

“To go from war zones to a stable environment, that was a completely different world,” she said. “It was a culture shock, I think.”

A couple of years later, the family returned to the United States, where Pott went to work as a communications director at a university.

She has since gone on to start a content service and strategy company while doing freelance writing on the side. She has published a couple of books, including Genocide in Rwanda: A Collective Memory, which grew out of a conference of the same name and shares witness testimony, history and cultural stories to educate foreign aid workers.

She edited and co-wrote the best-selling book, The Blue Pages: A Directory of Companies Rated by Their Politics and Practices, and also edited a collection of essays by women authors.

Today, in addition to her work and her family, she also enjoys spending time as the lead singer of a musical group, Rue 66, which performs French ye-ye music. (The term ye-ye is derived from “yeah, yeah,” as the music reflects the French reaction to the musical British invasion of the 1960s.)

Using the French skills she started at Pacific and solidified in Africa (French is the diplomatic language of Rwanda and many international organizations, including the UN), she and friends perform at parties, often in period dress, and recently were granted a recording contract for their music.

“It’s frivolous, super fun to play,” she said. “It’s super easy in that respect — not like talking about genocide.

“I would never have thought I would be doing this,” she said.

But that’s the kind of journey a broad education can start.

“Get a liberal arts education. Learn to write and write well. That’s really what got me the job (with the UN): the ability to write, investigate and present,” she said.