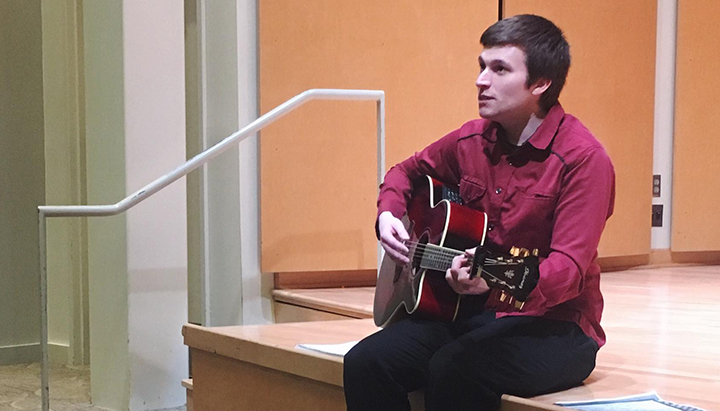 Jamie Anderson ‘17 always loved two things: helping people and playing his guitar. During his second year at Pacific University, he was introduced to the new music therapy program and immediately knew it was his calling. So, he quickly switched from a pre-optometry track and became one of the very first students in the budding five-year undergraduate program.

For a practicum, Anderson was placed at Oakgrove Elementary, a transitional school for youth who may be struggling with obstacles including speech issues, mental health issues or family problems.

Some of his work included working with students to write original songs, from lyrics to chord progressions to melody. The process revealed themes ranging from abandonment and loneliness to hope and love.

“Songwriting is so powerful in … really recognizing and being able to articulate your thoughts in a way that might be easier than telling someone, ‘Hey I’m really struggling right now’ or ‘I’m really happy right now,’” Anderson said.

During Pacific’s Senior Projects Day in April 2017, Anderson talked about his experience, played the guitar and invited the audience to sing along to a song he had written with a student at Oakgrove.

The goal, he said, isn’t to write a catchy song, or even one that he likes; it’s about helping clients create something that fosters their own pride and sense of connection.

Though Anderson will walk at Commencement in 2017, he’s still got another year ahead, completing the final internship for his music therapy degree. He looks forward to spending the next several months continuing his work with Portland Music Therapy.