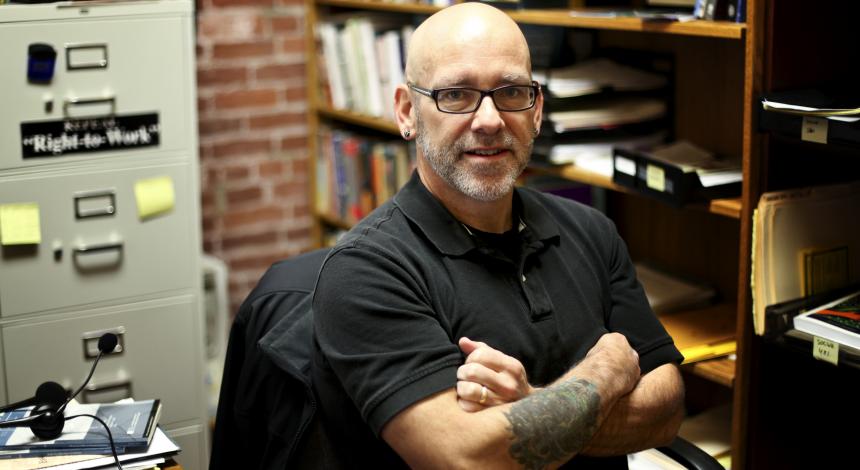 Sporting elaborate tattoos on his arms, a pair of studded earrings and faded jeans and shirt, Don Schweitzer doesn’t appear to be a college professor who has just won a prestigious grant.

Schweitzer, assistant professor of social work at Pacific University, is one of only 15 faculty in the country to win a grant to the Child Maltreatment and Intimate Partner Violence: Early Career Scholar Interdisciplinary Training Program.

Funded by the National Institute of Child and Human Development (NICHD), the program seeks to help early career scholars in developing research plans focused on prevention and response to child maltreatment and intimate partner violence.

A variety of professionals, including psychiatrists, public health physicians and medical doctors, will be involved in the grant program, says Schweitzer, who adds it’s quite an honor for someone who lacked direction in his youth.

Schweitzer took a wayward path to becoming a college professor. He graduated high school in his home state of Kansas. Then, he says, “I kind of rambled around the Midwest, from North Dakota to Texas, working on farms, that kind of thing…40-50 years ago they’d probably would have called me a hobo.”

At age 23, he joined the Navy and found he had a love for learning.

“I really didn’t think classroom learning was for me, but it was through that process in the Navy, in learning about physics and chemistry and mathematics…I just loved that stuff.”

He worked on a nuclear reactor program the Navy formerly operated in Idaho, then journeyed to posts in Hawaii and San Francisco, finally ending up back in Idaho as an instructor for the reactor program.

Leaving the Navy in 1993, Schweitzer became the operations manager of a construction company in Idaho. Around the same time, the men’s homeless shelter in that area closed.

“I kind of got caught up in this we’ve-got-to-have-a-new-one, so a year and a half, two years later, I found myself unlocking the door of the new shelter as program director.”

“I knew this (running a homeless shelter) was a whole set of skills I didn’t have,” he says.

He finished up his bachelor’s degree, working at the shelter for the entire four years, but then realized that mental health services would be an important part of solving social problems such as homelessness. He went on to earn a master’s degree at Boise State University, “because I wanted to understand and provide those mental health services for the real chronic homeless population.”

Again, after earning the master’s degree, he realized he wanted to understand how to evaluate programs and services in the bigger picture of social work. So he went to Portland State University to work on a doctorate, which he just finished this past July. While at PSU, he researched runaway and homeless youth while helping to run a homeless youth shelter program.

His field can be sobering, if not downright discouraging. Still, Schweitzer says, “I feel an incredible amount of optimism (although) I come from a theoretical background that a lot of social services don’t work because real well-meaning, intelligent people created something for people, but it doesn’t work for them.

“We need to be working with the people who need those services, having them help us create the programs, evaluate the programs, and only through that bottom-up model do I think we’re going to start seeing some change.”