Music Department's Spring Concert Series Offers Something for Everyone 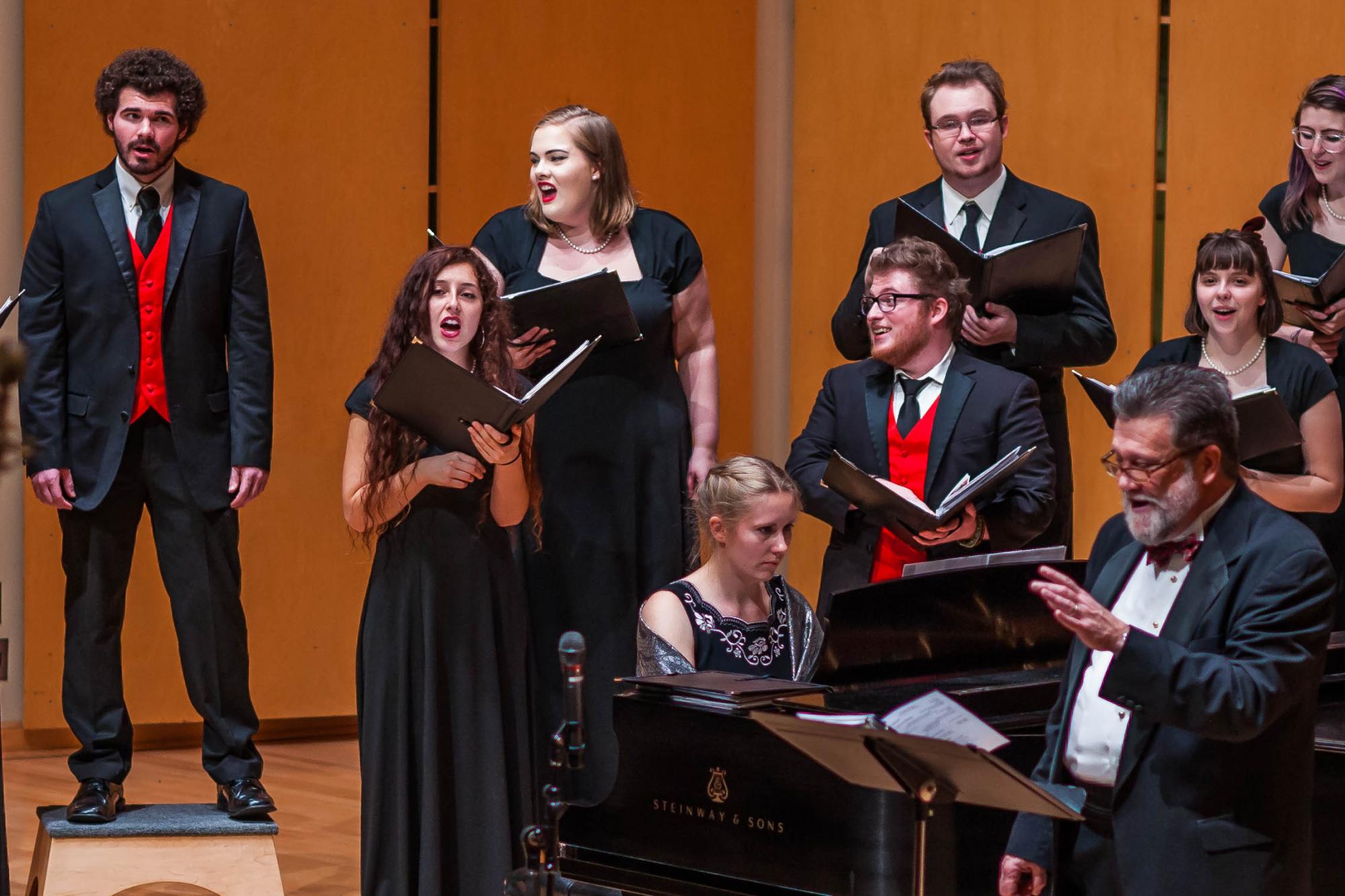 The Pacific University Music Department will present a variety of delightful sounds and melodies through its spring concert series, scheduled to begin Friday, April 19 and continuing through Saturday, May 4.

The five performances presented by the Music Department each feature a different ensemble of Pacific student musicians. These each begin at 7:30 p.m. and take place in McCready Hall of the Taylor-Meade Performing Arts Center on the Forest Grove Campus.

On Friday, April 19, the university Chamber Singers will present their spring concert, “Songs of Farewell," which will include selections appropriate to Good Friday. Under the direction of Dr. Scott Tuomi, the Chamber Singers will perform John Taverner’s “Leroy Kyrie,” as well as “A Good Night,” by Richard Rodney Bennett, “Warum is das Licht Gegenben,” by Johannes Brahms, “Lark” by Aaron Copland and the ever-popular “Wade in the Water.”

The Pacific Symphonic Band will take the stage the following evening — Saturday, April 20 — to put forth an array of musical styles. In addition to performing favorites “Amparito Roca” and Wagner’s “Elsa’s Procession to the Cathedral,” the Symphonic Band, under the direction of Dr. Michael Burch-Pesses, will offer its rendition of Alfred Reed’s famous transcription of “La Procession Du Rocio.” Also on the program are the lovely Irish song “The Willow Tree” and “Aurora Borealis” by Rossano Galante. Closing the program will be “Jitterbug,” a concert band homage to music of the Big Band Era.

Pacific’s Spring Jazz Nite, featuring the university’s Jazz Band under the direction of Burch-Pesses, follows on Friday, April 26. The band will perform standard numbers like Duke Ellington’s “Caravan,” “Moment’s Notice” by John Coltrane, “You’d Be So Nice to Come Home To” by Cole Porter, and “Georgia on My Mind” by Hoagy Carmichael. The Jazz Band will also perform recent compositions “Out of the Doghouse,” “Beulah Witch,” and “Another Excuse to Play the Blues.” Renowned pianist George Mitchell returns to Pacific as a guest artist following his highly successful stint in Las Vegas.

The Pacific Philharmonic Orchestra takes the stage on Friday, May 3 for its spring concert offering. Under the direction of Dr. Dijana Ihas, the Philharmonic will perform Brahms’ “Festival Overture,” Wolfgang Amadeus Mozart’s “Sinfonie Concertante” for Violin and Viola — featuring students Betsy Hesser on violin and Bailey Clark on viola — and Franz Schubert’s famous “Symphony No. 8" (a.k.a. the “Unfinished Symphony").

Pacific’s Concert Choir and the Music Department’s newly formed soprano/alto and tenor/bass choirs will give the season’s final on-campus performance on Saturday, May 4. Under the direction of Pacific music faculty Sam Barbara and Steve Peter, this uplifting concert will include a recently commissioned work by Jake Runestad entitled "Rise Up!", the beautiful “Good Night Dear Heart” by Dan Forrest, and the groundbreaking work from Argentinian composer Ariel Ramirez, "Misa Criolla," the latter of which will be a collaboration of Pacific's ensembles with choirs representing PCC Rock Creek. The Washington Post has proclaimed Misa to be “a stunning artistic achievement,” and a second joint performance of Misa Criolla by Pacific and PCC choirs will take place at St. Matthew Catholic Church in Hillsboro at 3 p.m. Sunday, May 5.

Pacific University's Music Department is flourishing, with more than 100 students majoring in music programs, up from just 30 a mere decade ago. Pacific offers bachelor's degrees in music therapy, general music, music performance and music education and is deeply involved in spreading access to music education throughout the community. The Pacific University String Project — an educational initiative in which college music students provide instrument lessons to K-12 students — was named the best in the nation for 2018 and has since expanded into the Music Education Project, including band and soon to include choral lessons. And each May, the Music Department hosts the annual Music in May festival, one of the longest running high school music festivals in the country.

Pacific recently unveiled renovations to its nationally renowned performance venue, Taylor-Meade Performing Arts Center, adding practice and classroom space. Music students — along with about 150 non-music students — perform in the wide variety of ensembles at Pacific. Earlier this year, the Music Department successfully produced the most ambitious concert undertaking in its history with a three-day performance run of Gilbert and Sullivan's H.M.S. Pinafore.

General admission for all concerts at Pacific University is $7, with senior citizens and Pacific employees admitted for $5. All students are admitted free with valid ID. Tickets may be purchased on site or in advance by calling 503-352-2918 or visiting pacificu.edu/musictickets.