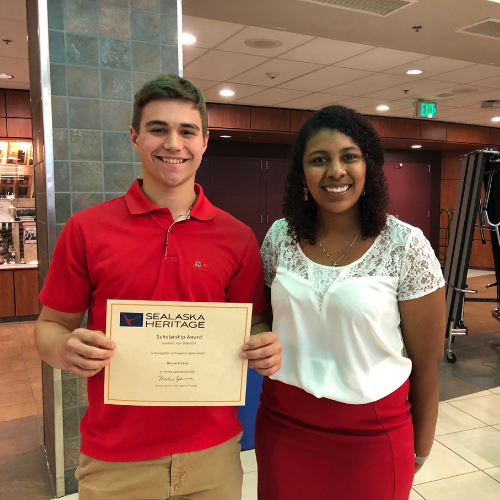 Only about 100 people in the United States are fluent speakers of Lingít, one of three heritage languages spoken in southeast Alaska and western British Columbia

But Nicole George ’16 is helping others learn.

Since January, George has served as the Tlingit Language Project coordinator at the Sealaska Heritage Institute, a private nonprofit corporation in Juneau, Alaska, that seeks to perpetuate and enhance the cultures of the Tlingit, Haida and Tsimshian people of southeast Alaska.

Part of the institute’s work is the Haa Yoo X’atángi Deiyí: Our Language Pathway program. Funded by an Alaska Native Education grant through the U.S. Department of Education, the program helps college students become certified speakers and educators of their heritage languages.

Languages in the project include Lingít Yoo X’atángi (the Tlingit language), Xaad Kíl (the Haida language), and Sm’algyax, the Tsimshian language. George works specifically with those learning Lingít, the language she grew up speaking in Juneau.

Her own parents — her mother is Tlingit and Lummi, her father is African-American — spoke only English. George’s mother was part of a generation of Tlingit who were forced into mainstream schools where Native languages and identities were suppressed. She purposefully did not teach her children the Lingít language, so they would not have to endure the same trauma she did.

But fortunately, times have changed. George’s grandmother and various language programs allowed her to learn her heritage language as a child.

“Our elders realized the language was dying,” George said.

She grew up not only with the language but also with a Tlingit value to remember who she was and where she came from. And someday, she was taught, she might be asked to respond to a call to “Come back. Your people need you.”

When the call came, she answered.

George said her time at Pacific was her first departure from a majority Tlingit culture. When she got to Forest Grove she thought, “Uh oh. This will be difficult.”

Nobody spoke Lingít, so her heritage language skills eroded — though she studied Mandarin and became a star student. Even in the foreign environment of Pacific, she excelled. She was named Boxer of the Month, Boxer of the Year, Student Life Senior of the Year and Outstanding Senior for her contributions to university life. She was active in the Black Student Union, Unified Sports and Qilin Club. And she grew close to some faculty members, including Politics & Government Department Chair Jules Boykoff.

“The way she brings together her sharp intellect and an open heart reminds me of why we are all here on this earth,” Boykoff said. “And to say the work she is doing to preserve and extend the Lingít language is vital is to make an enormous understatement.

“And my, is she patient — over the years she has taught me numerous Sm’algyax words and phrases like ama g̲unłaak! (good morning!), t’oyaxsism (thank you), and never once has she winced in pain over my off-kilter pronunciation.

“In a word,” Boykoff said, “Nicole is likoodzí (awesome).”

After graduating from Pacific, George got her master’s degree in environmental studies, education and tribal policy from The Evergreen State College in Olympia, Wash. She then took a job as a program coordinator at the Pacific Education Institute in Olympia, where she was working when she got a call from Lee Kadinger, Sealaska’s chief operating officer.

“He asked, ‘What are you doing?’” George said. Then he told her, “We’ve got this grant and we think it’s perfect for you. We think it’s time for you to come home.”

Back in southeast Alaska, she feels at home again. And she knows she’s doing important work for herself and her people.

“I’m excited and hopeful about what these students will do,” she said. “It warms my heart. It also makes me a little jealous that I didn’t have the same opportunity.”

(In the photo: Nicole George presented Michael Cesar with a scholarship for the 2018-19 school year at Juneau-Douglas High School. Photo by Kayla Roberts, Sealaska Heritage Institute.)