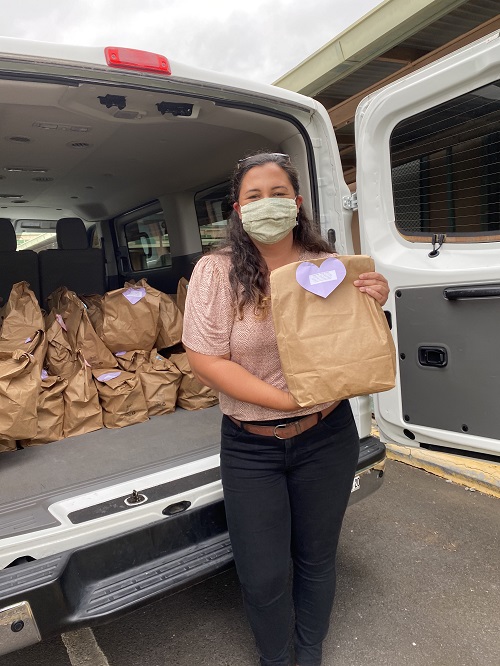 Anuhea Wall ’15, MSW ’17 feels blessed to have a full-time job that has allowed her to work remotely during the COVID-19 pandemic.

Wall is a social worker for the Lili‘uokalani Trust on the Big Island of Hawai‘i. In her daily work, she supports families with Native Hawaiian children on whatever goals they need to address.

Recently, she has also been delivering groceries to community members and the families the trust serves, in partnership with a local farm on the Big Island — one of the trust's newest initiatives.

“I had this realization with myself that, if I’m lucky enough to be in this position where I’m still fully employed and part of a pretty resilient population amidst all of this, and I have the opportunity to give back to others, then it’s my responsibility to do that,” Wall said.

The Lili'uokalani Trust is a private foundation founded in 1909 that supports Native Hawaiian children through direct services and collaboration with community partners.

“We try to come from that strengths-based, client-centered model. So our role is really flexible. With some families I’m providing really individualized grief counseling, and with other families I’m in more of a case manager role, where I’m trying to connect them with different resources,” Wall said.

“It’s really broad, and it’s a really good way we can meet our families wherever they are at. And throughout all of our programs, we also try to integrate cultural values and practices that really specialize these services to Native Hawaiian families.”

Those cultural values are especially important to Wall, who felt like she was missing that connection to her culture for a time.

Wall was born and raised in Kealakekua, Hawai‘i, in a large ranching family that included two siblings and six cousins.

Like many students who come to Pacific University from Hawai‘i, she was recruited by “Uncle” Jeff Grundon.

“Uncle Jeff came to my high school and did an informational meeting and talked about Pacific and the Hawai‘i Club [Nā Haumāna O Hawai‘i] and how amazing that support is to have for Hawaiian students on the continent,” she said.

She was looking for a place to continue playing basketball while furthering her academic career and Pacific’s financial aid package helped. But ultimately, she said, it was the established Hawaiian community at the university that drew her.

“I didn’t even visit, just got on a plane at the end of the summer by myself and went to Forest Grove,” Wall said. “But with the support of the Hawai‘i Club and the Hawai‘i student orientation, I was easily integrated into the community.”

Still, she said, she didn’t immediately intend to return to her home in Hawai‘i.

She majored in psychology and, during her junior year, took a class that would lead to her eventual career path: social work.

“I didn’t even really know what a social worker was, or about the program that Pacific offered, in my undergraduate years, but once I took those classes, I could see myself diving deeper into this field,” Wall said.

During a summer internship at a residential facility for teenage girls, Wall saw the experience and intervention skills of the staff members who had master’s degrees in social work and knew that she wanted to pursue a graduate degree as well. Pacific had recently opened its master of social work program on the Eugene Campus, and Wall had family in the Eugene area, so it just made sense to her to stay on at Pacific for graduate school.

During the second year of her MSW program, she interned with Ophelia’s Place, a community and support organization for adolescent girls, landing a permanent job after she graduated.

It wasn’t until two years later, when her sister was expecting a baby, that Wall began to consider returning to Hawai‘i to live and work. She packed up, moved home, and spent some time playing full-time Auntie and picking coffee until landing the job with the Lili‘uokalani Trust. 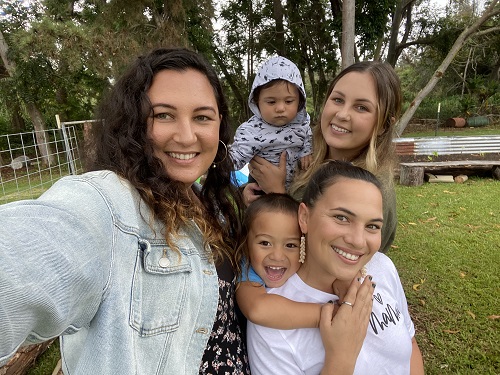 The liberal arts education she received at Pacific helped prepare her for a career that she now finds deeply meaningful.

“I think the most fulfilling part of working here is seeing how integrating the cultural aspects of Native Hawaiian culture really affects families in a positive way,” she said. “And I think the reason it’s most fulfilling to me is because, for so long, I felt like I was missing that piece. I hadn’t felt fully connected when I decided to leave at age 18 and didn’t really have that self-awareness or reflection to realize how that was affecting me.

“It’s a really full-circle moment to be in the position that I am now. I’m so grateful for the opportunities I’ve been given through my education and the support of my family and community.”