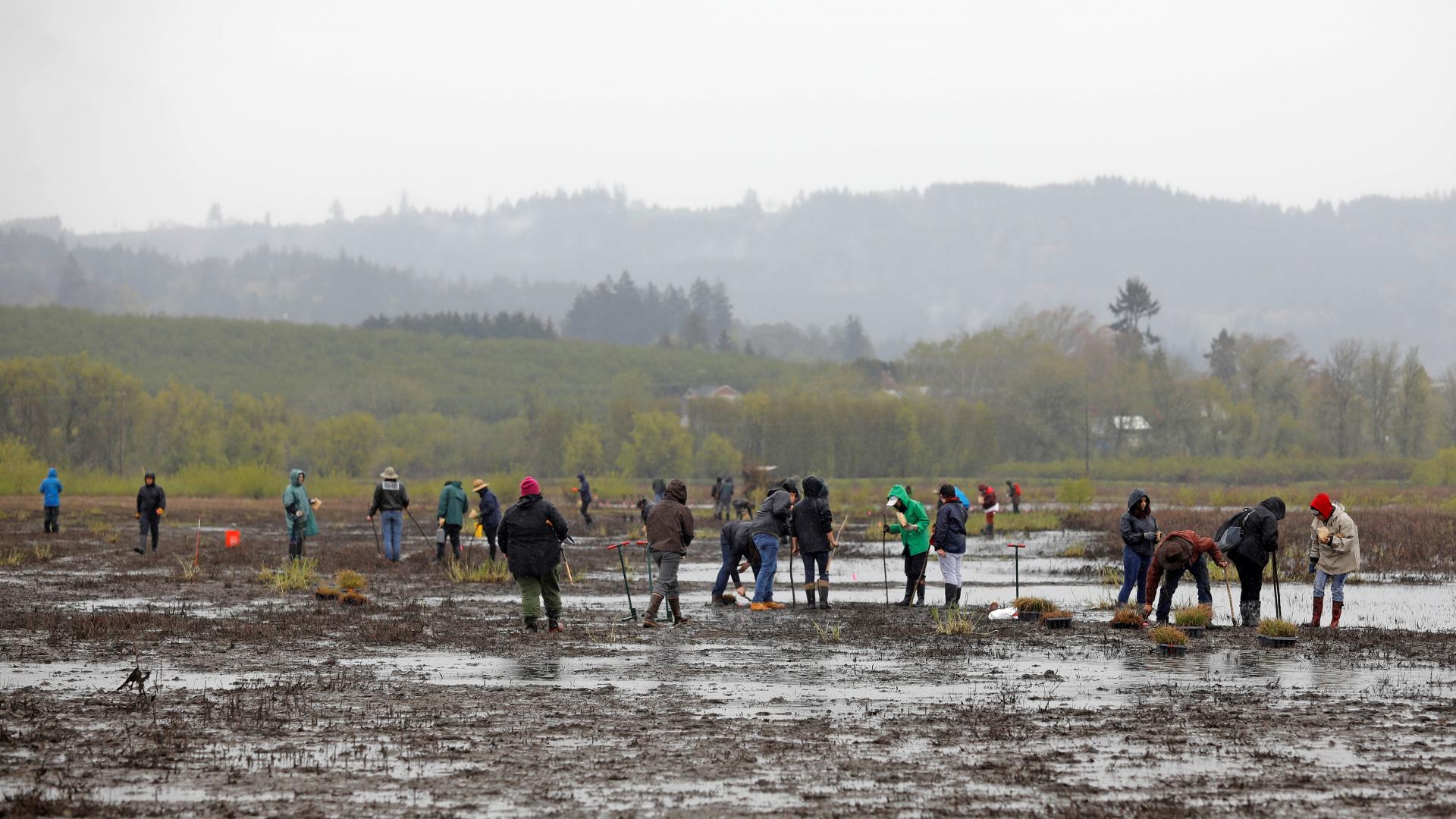 A long-lost seasonal lake that was a center of life for Native Americans who lived in the Tualatin Valley two centuries ago is slowly regaining its form, thanks to the efforts of members of the Confederated Tribes of the Grand Ronde, the U.S. Fish & Wildlife Service, and volunteers from Pacific University.

Wapato Lake’s waters lapped near a bend in the nearby Tualatin River at roughly the center of the present-day town of Gaston, Ore., 10 miles south of Pacific’s Forest Grove Campus. For an unknown length of time before the area’s white history began, members of the Tualatin Kalapuya lived at the lake’s edge, or visited it to harvest wapato and to meet and trade with other indigenous Americans.

Through the decades, the lake was lost to become farmland and the people removed, as tribal members were scattered by white settlers and federal policy. A railroad executive named Joseph Gaston founded the town that now holds about 700 people along Oregon Highway 47 between Forest Grove and McMinnville, and few traces of the pre-settlement days remain. For decades, the former lakebed has been dry, given over to onions.

Now, members of the Grand Ronde, along with supporters that include members of the Pacific University community, have replanted the former onion fields with wapato, an edible tuber sometimes called Katniss or duck potato. While the Kalapuya people have been scattered and relocated, mostly to a reservation south of Gaston and Wapato Lake, the land they were forced to vacate is reverting to the landscape their ancestors would recognize.

“We’re looking to the future,” Greg Archuleta, cultural policy analyst for the Confederated Tribes of the Grand Ronde, said in an interview. With the restoration of Wapato Lake, he said, the tribes can start “bringing back those traditions, those first foods, that are going to be accessible in the longer term for future generations.”

A broad and sustained wildlife and wetlands restoration project by the U.S. Fish & Wildlife Service in 2013 created the Wapato Lake National Wildlife Refuge, a 900-acre protected area where waterfowl and other wildlife live or migrate through. More recently, the agency has worked more closely with the tribes to re-establish the lake. 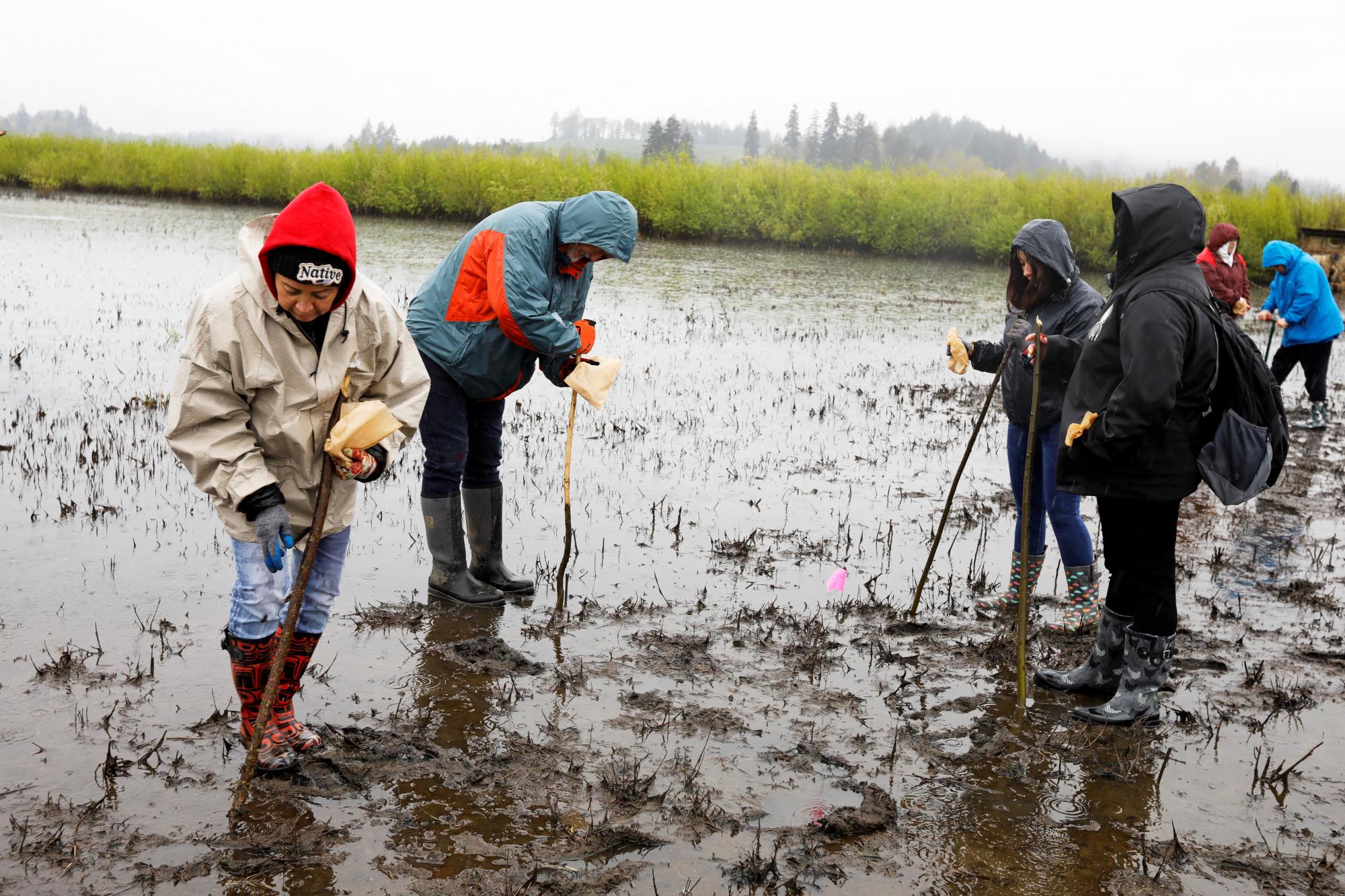 Twice this year, tribal members and volunteers have visited the flatland to replant wapato. Among the volunteers were Pacific University Archivist Eva Guggemos and Creative Writing and English Literature Professor Darlene Pagán. Both belong to a university committee on indigenous engagement and have sought ways to build connections with the Grand Ronde and other indigenous peoples.

“We are all stewards of the land where we work and play, and we have much to learn and gain from indigenous communities about how to protect and preserve what's here,” said Pagán, who teaches a course in Native American literature and has led students on civic engagement projects. “My goal is to make students more aware of the work that has been done and still needs to be done that they can engage in, but the foundation of the course is story. That often begins with the story of where we are, its history, and why.”

Guggemos became absorbed by the stories of the Tualatin Kalapuya and other groups after researching and documenting Pacific University’s ties to the Forest Grove Indian Training School, an affiliated residential school that operated in Forest Grove with the blessing of university officials in the late 19th century. The school was among those established by the federal government to house and school Native American children in the ways of the white European culture that had supplanted and scattered them. The Forest Grove school was relocated to the Salem area in the 1880s and still operates as the Chemawa Indian School.

The Forest Grove Indian Training School, oddly enough, didn’t educate the children of tribes that lived in and near Forest Grove; instead, the students were drawn from tribes around the region, where school officials had connections with tribal leaders.

As part of Pacific’s resolve to open official functions by offering acknowledgements of the original inhabitants of the land its campuses now occupy, Guggemos and others at Pacific grew interested in learning more about the people who occupied the lands where its campuses stand. She embarked on an intensive study of local indigenous settlement patterns and practices.

Along the way, she worked with Grand Ronde tribal officials to identify the locations of Tualatin villages at and near the former lake. As the Fish & Wildlife Service drove the effort to restore the lake as part of a regional wetlands initiative, Guggemos has forged a connection to the Confederated Tribes of the Grand Ronde.

Archuleta, who described the university as a partner in the effort to restore the lake, said Guggemos’s research has aided in the effort to gain a fuller understanding of what life was like in the Yamhill watershed before the indigenous people were forced out.

Determining where the Tualatin villages were located, Guggemos said, evokes mixed feelings for a modern-day researcher. She knows what once was here — and what’s been lost.

“It’s really exciting on one level,” she said. “On another, it’s really disturbing and sad.”