When the Boxers take to the gridiron Sept. 2 to kickoff the 2017 football season, they will be among the first of Pacific University’s athletic teams to compete on the newly named Ledbetter Field.

The state-of-the-art artificial turf playing field at Hanson Stadium in Lincoln Park was resurfaced this summer as it hit the end of its original lifespan. Pacific University Trustee Kim Ledbetter and his wife Barb made the upgrade possible with a six-figure gift to the university — the latest example of a longstanding tradition of support for Pacific. 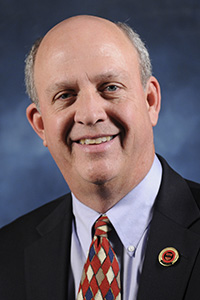 Ledbetter is a retired senior vice president of Standard Insurance Group and has been a member of the Pacific University Board of Trustees since 2006. He and his wife have been dedicated supporters of the university’s athletics programs, as well as endowed scholarships for students, capital initiatives including the renovation of the College of Optometry Jefferson clinic, and the Pacific Excellence Fund. In 2014, they were inducted into the President’s Circle, recognizing the university’s most committed donors who have given $100,000 or more to Pacific in their lifetimes.

In recognition of their generosity and leadership, Ledbetter Field will be officially dedicated at Pacific’s Homecoming celebration on Oct. 7, when the Boxers take on Pacific Lutheran University.

Ledbetter Field is the centerpiece in the Lincoln Park Athletic Complex that opened in 2007 as a partnership between Pacific and the City of Forest Grove. Home to Pacific’s football, soccer and lacrosse teams, the synthetic turf field provides a professional-level playing facility for Pacific’s student-athletes.

Ledbetter Field is the newest named facility within the Lincoln Park complex. In 2014, the stadium surrounding the field was named Hanson Stadium in honor of Rich and Joy Hanson’s contributions to the university. The couple provided the leadership gifts that allowed for the construction of the roof over the main grandstand and also contributed to other significant Pacific initiatives. In 2015, generous Pacific University donors Paul ‘78 & Nancy ’77, MAT ’82 Phillips and the Stanich Family led philanthropic support to add a state-of-the-art video scoreboard to the stadium, enhancing the fan and athlete experience.

Pacific University offers one of the premier NCAA Division III collegiate athletic experiences in the Pacific Northwest. More than a third of Pacific’s undergraduates participate in the university’s 24 athletic teams, pairing athletic prowess with academic success.

Pacific University is a comprehensive university offering undergraduate, graduate and professional programs in the arts and sciences, business, education, health professions and optometry. With approximately 3,900 students on four campuses, it is the only four-year university serving Oregon’s Washington County. At Pacific, students are inspired to think, care, create, and pursue justice in the world.