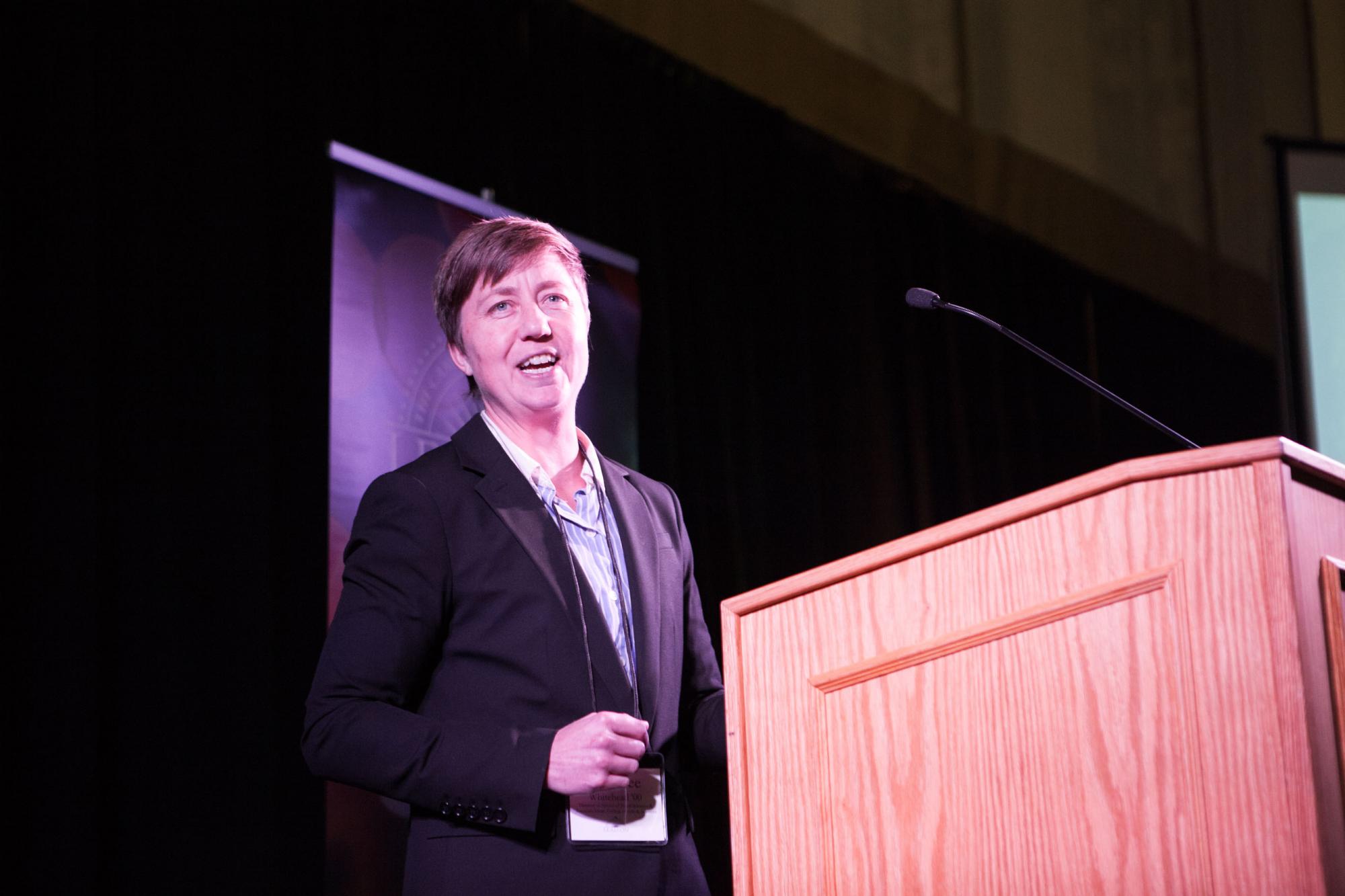 Pacific University paid tribute to the generosity of alumni and friends on Nov. 29, recognizing its most dedicated donors and the most successful philanthropic year in school history at its annual Celebration of Giving.

Donors committed a fiscal-year record $12.4 million in 2017-2018, the first year of the the public phase of Lead On: The Campaign for Tomorrow at Pacific University. To date, Pacific has secured more than $50 million in gifts and pledges toward the campaign's $80 million goal to strengthen itss endowment, develop and enhance learning environments, and invest in innovation for tomorrow.

"Your generosity not only creates the future for Pacific, it also transforms the lives of students today," said Vice President Cassie Warman.

Whitehead, a 2000 sociology major who was the first in her rural Wyoming family to attend college, went on to earn a doctorate and return to teach at her alma mater.

“Pacific changed the trajectory of not only my life, but of my entire family line — generations to come,” she said. “My partner — who was also a first-generation student at Pacific — and I have two little Boxer children. Because of the opportunities we had at Pacific, our kids have a completely different landscape of opportunity.”

She explained that 25 percent of current Pacific students are, like her, the first in their families to go to college, and that Pacific launches more students into the middle- and upper-middle class than any of its regional peers.

“My story is the story of Pacific — and it is centrally about social mobility and community responsibility,” she said. “I personally thank you for your support, which makes this launching pad and community of care possible.”

Professor Emeritus Byron Steiger and wife Dianne '79 are the newest members of the 1849 Society. He taught sociology at Pacific for 34 years, and the Steigers have since created a scholarship for Pacific sociology majors who plan to pursue graduate studies, as well as the foundation for an endowment that will give financial support to first-year Pacific faculty members.

New members of the President’s Circle include:

Essilor of America (Dallas, Texas) | The company has been strong supporters of Pacific’s College of Optometry for almost two decades, where they created the Essilor Optical Technology Lab and recently supported the renovation of Jefferson Hall.

Robert '63 and Sunny '67 Iboshi (Hillsboro) | This alumni couple has supported a wide range of Pacific initiatives for more than four decades, including the Pacific Excellence Fund, Boxer Athletics and an endowed scholarship for students from Hawai'i.

Dr. Peter and Judy Kohler (Fayetteville, Ark.) | Peter Kohler serves on the Pacific Board of Trustees, and the couple’s philanthropic support includes the Kohler Endowment for Undergraduate Research to support the pursuit of undergraduate student research at Pacific through scholarships, stipends, travel support and equipment.

Fay Littlefield (Hillsboro) | The mother of a College of Optometry alumna and faculty member, Littlefield created an endowed scholarship for rural optometry students, as well as an award for public health outreach in the college.

Chuck and Connie Quinn (Clovis, Calif.) | The parents of a Pacific student funded the resurfacing of the baseball facility's infield with a synthetic turf to expland competition opportunities for student-athletes and community teams.

Dwight Taylor '29 (Washington, D.C.) | The late Mr. Taylor's children facilitated a gift to Pacific from his estate to create the Dwight D. Taylor Endowed Scholarship, awarded to students who have demonstrated academic excellence and financial need.

Gordon Zimmerman (McMinnville) | A longtime friend of Pacific’s music and history programs, the late Mr. Zimmerman left a bequest to create two scholarships, one for students of each department.

In an evening rife with gratitude, Pacific also highlighted the transformational impact that generosity is already making on the university’s students, programs and communities by unveiling five donor-funded learning environments:

The EyeSmile Outreach Program | Through a generous $1 million gift from an anonymous donor, Pacific established the EyeSmile Outreach Program to maximize mobile healthcare provided by the College of Optometry and School of Dental Hygiene Studies. The gift built two new state-of-the-art mobile clinics and also funded the creation of a new clinic coordinator position to run the program and coordinate the care.

The Brim Family Outdoor Learning Center | A gift from Trustee Evie Brim funded the construction of this outdoor classroom in the Pacific University Early Learning Community. The ELC serves children ages 3 through 8 and offers an envionrment for future teachers to study best practices in early childhood education, including nature- and place-based learning.

Baseball Infield Synthetic Turf | Through a significant gift from parents Chuck and Connie Quinn, the infield of the university's baseball facility received a major upgrade with the addition of synthetic turf.